This week I have a series of guest posts by my sister, Trish describing her first flight with her infant son. This past December she traveled from Sydney, Australia to London via Kuala Lumpur. The flight from Sydney to Kuala Lumpur is eight hours, from Kuala Lumpur to London, 13 hours and they had a four-hour layover in Kuala Lumpur. If you add in a two-hour checkin window and the hour or so it takes to get through customs and passport control in Heathrow, that gives a total trip duration of 28 hours – with a five-month-old baby. Intrigued? Read on… 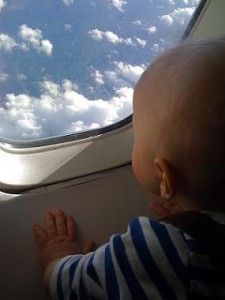 I’m Irish and my husband is British. We live in Sydney, Australia so we’ve flown between the UK and Australia a number of times. This trip, in December 2009 was our first flight as parents, bringing our five-month-old baby home to the UK and Ireland to meet his extended family. Normally our pre-flight planning consisted of determining what we each needed to be semi comfortable whilst confined in a 17” wide seat along with ~200 other passengers in ‘cattle’ class of a Malaysian Airlines 747. For me that meant a toothbrush, a hairbrush, moisturizer and possibly a clean top to change into half way. For my husband it meant packing a bag that most people would use for a long weekend break: two complete changes of clothes, a couple of books, an iPod, spare headphones, half the contents of the local pharmacy – because you just never know when you’re going to need something – slippers and a pillow of course!

Our trip pre-planning had previously been a chat over a beer discussing when would be the best time on the flight to fit in a few movies, have a few drinks, read, possibly listen to some music and of course slot in a few hours for naps. By the end of such conversations it wasn’t unusual to be concerned that the trip might just not be long enough.

The preparation for this trip was completely different. About 4 weeks before we left I was thinking to myself that we had actually lost all sense of reason, planning to fly home at the busiest time of year with a five month old infant who ordinarily didn’t like to sleep a lot and never sat still for any length of time. I had visions of spending 30 hours walking up and down the aisles of the plane with the baby in a Baby Bjorn apologizing to nearby passengers for his incessant howling. Meanwhile my significant other was fanatically trawling through the airlines terms and conditions to see if there was any way we could increase our hand baggage allowance without getting stung for some hefty charges, because let’s face it with all the baby stuff we had to bring on board it was looking like there just wasn’t going to be room for that pillow!

Malaysian Airlines carry on allowance permits both adults a personal item and a bag weighing no more than 5kg’s, whilst my son got an allowance of 10kg and his bag could be checked in or brought onboard. Doing the packing in my head in advance of our trip, I saw us arriving at the airport with two suitcases – to be checked in – and one carry-on bag containing most of our son’s clothes, toys and food along with toiletries and a book each for us, a baby bjorn, a stroller, a nappy bag, oh and a baby. I ran this plan past my husband. He was horrified. His response was that “we have an allowance so we can check in 2 bags and carry on 3 bags and they rarely weigh the cabin bags so we could probably be over the permitted 5kg’s”…. I pointed out that during the four-hour layover in KL, we would need to carry around anything we brought on board and if the baby was unsettled, one of us would have to carry him (and soothe him) so the other would have to carry everything else – including the nappy bag, the stroller and the Baby Bjorn. With this new perspective, he agreed that we should limit our carry-on baggage to what was really necessary.

Just for the record my husband survived the flight without his pillow but I had ordered a Hungarian goose down one, complete with a 100% cotton pillow protector to be there waiting for him when we arrived. I think that kept him going for the whole journey

6 thoughts on “Flying With A Baby: Pre-Trip Planning”