This is the third post in a series of guest posts by my sister Trish on her marathon 28-hour trip from Sydney to London – with a five-month-old baby. The second installment of this story, Flying With A Baby: On The Flight, was published yesterday. Today, she talks about arriving at their destination and dealing with jet-lag. 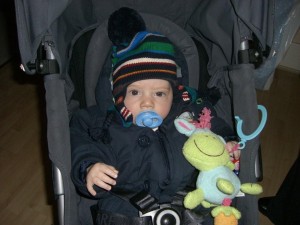 Upon arrival in London we had pre booked a taxi with a private London taxi firm to take us from Heathrow to Notting Hill where we were staying. There was a guy waiting for us at Arrivals making our transit entirely painless. The best part was that this premium service cost us around the same as the cheapest public transport option.

From London we traveled by train to Liverpool. Virgin Trains sometimes have really good deals on first class tickets at the weekend, but this weekend we were out of luck. However knowing how cramped train seats are and considering the per seat fare was only 10 pound we decided to buy 4 tickets, that way ensuring we had a table of four to ourselves. It was an extra £20 well spent!!

Seeing all our family and friends and introducing out son was great BUT the hardest part of the whole trip was a jetlagged baby. Normally an active energetic little boy, he was lethargic and sleepy during the day and quite often feel asleep sitting in a chair – something he’d never done before. But at night time he was alert and hungry and for the whole trip fed at least three times every night (between midnight and 7am). This was made even harder because he was in the same room as us so it meant all 3 of us were awake a lot at night, either feeding him, trying to settle him or trying to keep him quiet because we were staying in other people’s houses. One thing I regretted was not bringing a baby monitor which would have meant that he could have slept in another room, that way if he was just awake but quietly playing or gurgling we at least could get some sleep but if he got upset or started crying we would hear him first and not wake everyone else in the house.

The other thing I would do differently would be to book into somewhere for a few nights and just take some time out from the travelling and visiting. Obviously when the purpose of the trip is to see family it’s hard to justify taking some of that time to be by ourselves but I think that would have given us a day or two to recharge and ultimately would have improved our trip.

All in all it was a fun trip and we would definitely do it again, even though the next time there will be a whole host of new challenges because our baby will be a toddler, I suspect this will make the flight a lot harder but the flip side is that a toddler is easier to keep awake and active during the first few days so the jet-lag may not be as bad.