Of all the places I’ve visited with my children, Greece is the place I choose to return to again and again. I’ve spent time in North-Eastern Greece, in Athens and the Cyclades, specifically Paros. It’s a long way from Seattle to Paros but I would go again in the morning if I could.

The first time we visited Paros I fell in love. From the windswept hills with wild oregano blooming along the paths to the white-washed houses with cerulean blue trim and the empty beaches (we were there in late May) I was eternally smitten. With a toddler in tow, we visited artisan potters and silversmiths and explored the beaches at Kolimbithres and Monastiri. It was heavenly. (There’s a great summary of all the beaches on the island here).

It’s always a risk to return to somewhere which you’ve idealized in your mind but Paros, although a little more westernized, was still perfect on our last visit. The small cobbled streets of Paroikia are where I first let my young children roam out of sight as we explored the little shops and cafes. We walked along the promenade admiring the windmills, watching the inter-island ferries coming and going. We spent long evenings in Naoussa, checking out boats on the inner harbour, feeling like eavesdroppers listening to local musicians play in tiny bars.

My children learned to say kalimera (Good Morning), parakaló (please) and ef̱charistó̱ (Thank You) to the staff of the bakery we visited daily on the edge of Naoussa. They were fascinated by the intricate Greek breads and the unusual – to them – candies. Of course they riled against having to use these simple Greek phrases but we persisted and they beamed proudly when a waiter in Athens praised their efforts.

Logistics
From the U.S. we flew to London, on to Athens and then straight on to the islands. Having relaxed on Paros, on our way home we stopped in Athens to explore the Plaka and the Parthenon with our boys. I’d highly recommend taking this route rather than attempting Athens first – with jet-lag.

We stay with family on Paros. In Athens, we chose a simple, 3-star hotel near the Plaka – nothing fancy. The metro to the airport – built for the 2004 Olympics – has made getting from the airport into the center of the city so much easier. 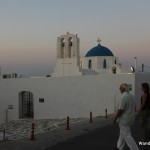 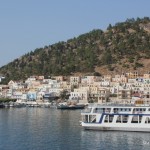 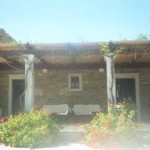 One thought on “Greece With Kids”