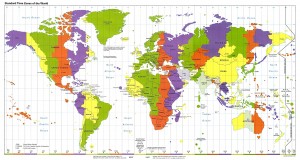 I started thinking about jet-lag and how I would manage it days before my trip to Sydney. Yes, I tend to hyper-organize but also I was nervous about traveling east-to-west for the first time in a long time and traveling alone with my two children. Knowing that I would likely be more tired than they and loath to start our vacation with disagreements I came up with a plan.

Getting A Jump On Jet-lag
The night before we traveled, I discussed the flights with my boys. Specifically, we talked about the length of each flight and departure and arrival times. The flight from Los Angeles to Sydney is just over 14 hours. It leaves at midnight PST and arrives at 8am Sydney time. The departure time meant that it was fairly easy to convince my kids that a strategy of sleeping first and playing later would be good for all of us. My hope was that they would sleep six to eight hours each and hence start the “day” fairly refreshed. This is, in fact, what happened. I think it’s a family record for the longest amount of time CAM has ever slept on a flight.

Stay Awake By Keeping Active
During our first day in Sydney, I was much sleepier than my children. There was a couple of times when I almost fell asleep to the “Twinkle Twinkle Little Star” playing on my nephew’s crib lullaby toy – my children thought this was hilarious. But I’m a big believer in using daylight and fresh air as tools to help combat jet-lag so we walked, we swam, we played with my nephew and all managed to stay awake until almost 8pm.

The First Night Is The Most Difficult
I’m a light sleeper. I heard BigB wake at 3am. I listened for him to return to bed and when he didn’t, I followed him into the living room to discover him calmly reading his book on the sofa. I had to work to get him back to bed and then lie on the floor beside him to help him get back to sleep. CAM woke at 5am. He was eager to get up and insistent that he couldn’t sleep any more. Hushing him so that he wouldn’t wake his brother or the baby, I convinced him that getting a little more rest was worth a try. He did fall back asleep but only for another couple of hours and the interrupted sleep showed in his demeanor during the rest of the day. I had to work hard to keep an even temper and not be mad with him when he provoked petty disagreements with his brother.

Even More Fresh Air
We spent most of the second day outside on the ferry, picnicking in the Royal Botanic Gardens and playing at the Andrew (Boy) Charlton pool. Both boys fell asleep easily on this second night in Sydney, slept well and woke refreshed and in good humor on the morning of the third day. Personally, I think that just over two days for all of us to be over jet-lag is a great start to our vacation.

If you have any favorite tips for preparing for or managing jet-lag when traveling with children, do share in a comment below.