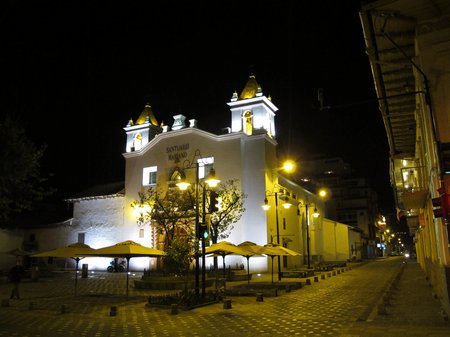 Cuenca is a pretty, very walkable city. It’s the first place we visited in Ecuador that I could imagine recommending as a family-friendly vacation destination. The city, with it’s many churches and a strong focus on traditional arts and culture is unmistakably Ecuadorean, but it also has a very European feel. It is smaller and cleaner than Quito and a fraction of the size of Guayaquil.

When we passed the church above on our first night in Cuenca, I thought the umbrellas might be for an open-air cafe so we headed back there the next morning but instead of coffee, we found a flower market. The colors were beautiful, but my kids were hungry and getting grumpier by the second. We hurried by in search of breakfast. 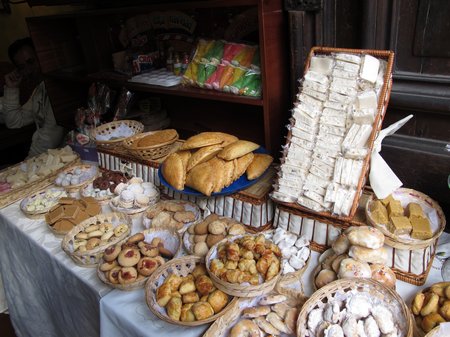 This display of sweet and savoury pastries at the front of the Corpus Cafeteria stopped them both in their tracks. We abandoned plans of a sit-down breakfast and instead let the boys choose from this selection and had a picnic breakfast in the main plaza. 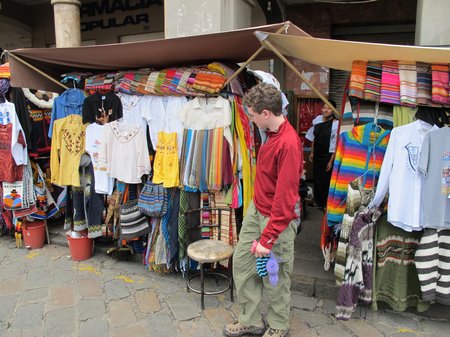 After breakfast we headed over to the craft market at Casa de la Mujer. This market has over 100 stalls selling everying from traditional dress to school uniforms, shoes, bags, watches and tourist totchkes. We found a Panama Hat for Murph and some t-shirts for the boys. In the process, my kids revoked my ability to buy anything at a market for the rest of our trip. Apparently my haggling skills are abysmal and in future, I’m supposed to call on the kids to shop for me!

Mama Kinua is a small cafe which serves a set lunch (almuerzos) for $2 or less on one side of the market. The cafe and the tours which they promote, help support a village in the mountains south of Cuenca. Murph and I were interested to go on the tour but our boys vetoed this idea with: “that would be like an Ecuadorean family coming to Seattle and paying to watch us drink coffee in Starbucks”. 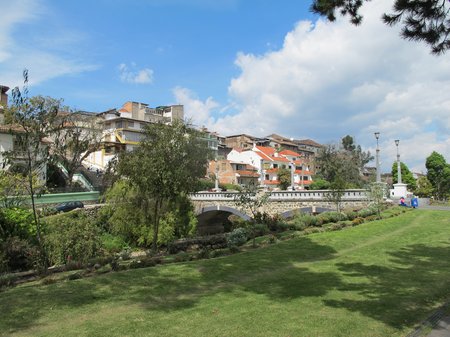 We took a long walk along the river after lunch. After dusty Quito, being harrassed by a drunk on the bus in Guayaquil and being damp and cold on the coast, this paved, tree-lined river walk in the sunshine was a welcome treat. Our guide book mentioned that some women still wash and dry their clothes along the river. Well, they do, but not in the downtown area of Cuenca. If you want to see this, you’ll have to go much further out towards the suburbs – which we did by accident the next day – but honestly, I can’t see why anyone would consider watching someone else hand-wash her clothes in cold water and in public worthy of going to look at.

Our final stop of the day was at the Museo del Banco Central ‘Pumapungo’. I was interested in visiting the museum to see the ethnograhpic exhibits showcasing Ecuador’s many tribes – and yes, ok, the shrunken human heads. My boys protested but the museum also has a numismatic exhibit in the basement which is where we went first. I’m sure we are not the intended audience for this exhibit on the history of money in Ecuador but my kids lapped it up – hard not to when you can point to a display and say “Hey, look, it’s real piece of eight!”. From pre-Incan trading tokens such as shells through a number of iterations of Spanish coin the exhibit sets the stage for learning about the history of Ecuador’s trade and economy. (The exhibit is all in Spanish so our little dictionary was heavily used during this visit). The kids tuned out for most of the modern section which chronicled Ecuador’s economic troubles through the 20th century but my husband and I found this whole section fascinating.

We continued upstairs to the very worthwhile ethnographic exhibits. There are dioramas of life, lifestyle, arts and crafts from all over Ecuador. I overheard at least one “Wow! That’s cool!” from my kids even though they denied it afterwards. The section on the Shur tribe, which includes the famous human shrunken heads is interesting, but grotesque and didn’t really hold my boy’s attention in the way that I thought it would.

Here’s the other reason why I think Cuenca should be on the map as a family-friendly tourist destination: it’s cheap. During the day I’ve just described, we spent $90 – including accommodation. We had dinner at a small restaurant near our hostel. It was good but nothing special and including drinks came to about $27 – meaning we spent a total of $10 per person on food for the day. We bought a couple of t-shirts for $10 and a hat for $12. Our budget hostel came in at $7 per person per night. Even if you were to find a fancier hotel (of which there are plenty), a family of four could still enjoy Cuenca on a budget of $150 per day or less. Worth considering for an upcoming vacation maybe?