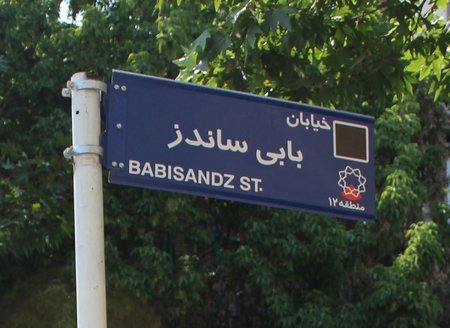 “There’s a Bobby Sands St in Tehran”, Murph said as we walked towards the metro station.
“No way!”
“Yep. They renamed Winston Churchill Ave to Bobby Sands St”.
How is it that my husband, who rarely cracks open a guidebook can find such a cartographical gem?

We walked along Ferdowsi St, past the Turkish and German embassies and found the forbidding barbed-wired-topped walls of the British embassy. It was a sight familiar from my college days in Belfast complete with traffic diversions in front of the entrance.
Cue Murph: “The entrance used to be on the other side of the building but they didn’t want the address to be Bobby Sands St”.
It was like hearing a delayed news report from 1981 – and totally bizarre.

Since it’s possible that a person may need to be Irish to appreciate the strangeness of this Tehranian street name, let me briefly explain: Bobby Sands was a hungerstriking IRA man who was elected to Parliament in early 1981. He died in prison before taking up his seat.

We left Tehran not even consciously thinking but assuming that this little news echo from the 80s was finished. It wasn’t. As we’ve traveled through Iran easily over a hundred people have stopped us on the street or come out of their shops to welcome us to their country. Everyone asks “Where are you from?”. On hearing “Ireland”, almost all the people in the 30-and-older age group ask “North or South?” and mention Bobby Sands like they’re remembering the name of the only famous Irish person they know.

At first we found this confusing and surprising. It’s like everyone in Iran (of a certain age) knows the answer to an obscure Irish History trivia question. The only reasonable explanation that I can come up with is that Bobby Sands – and possibly the activities of all IRA hungerstrikers – must have been reported heavily in the Iranian media at the time maybe for standing up to “the oppressive Western powers” (a favorite phrase in the Iranian English-language news media).

Bobby Sands is long dead. The Troubles are (mostly) resolved. I’m a pacifist so I’m not going to spend any more energy thinking about the hows or whys of this but, I am curious: I wonder if this story has a contemporary equivalent and what that is?