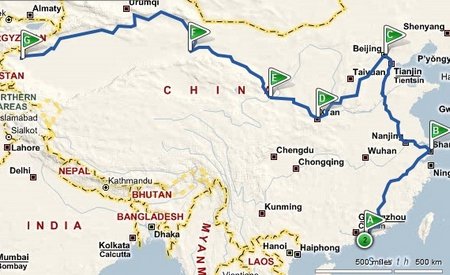 We’ve always planned to include visiting China on our family world trip. Until last weekend this wasn’t much more than an item on the list of countries we plan to visit. Then, while flipping through maps in the excellent Wide World Books and Maps travel store, my husband threw me a “how about we go here” curveball which almost knocked me flat. His idea? “Let’s follow the Silk Road”. “You want me to take my children into Afghanistan, Pakistan and Iran?” was my shocked reply. Waving a copy of Lonely Planet’s ‘Pakistan and the Karakoram Highway‘ he said “When you read Three Cups Of Tea you said that you’d love to visit that area.” This is the essence of my relationship with my husband: he comes up with crazy ideas and I, being a plodding, practical person, figure out how we can turn the ideas into reality.

The Silk Road idea has definitely caused me a number of sleepless nights in the past couple of weeks but the benefit is that we now have a much clearer idea of what the China portion of our trip will look like. In addition, doing detailed planning for the trip is making it feel more and more real so much so that even CAM, our very reluctant traveler, has given up grumbling about it and is openly talking about “when we’re traveling”.

There was no single Silk Road. The term was coined in the 19th century by Baron von Richthofen, a German explorer and cartographer. It describes a set of routes between Europe and the Middle East across Central Asia ending in the old Chinese capital city of Ch’ang-an (modern Xi’an). Silk threads found in Egyptian burial remains from as early as the 2nd century BC indicate that these trade routes were active at that time. The Travels of Marco Polo may be the first travelogue focusing on the Silk Road so we know that it was in use through the 13th century. By the 15th century, with great explorers preferring sea routes, most trade moved from the Silk Road to the naval Spice Routes. (If you’re interested in reading more about Marco Polo, National Geographic published a three-part series in May, June, July 2001. These are a fascinating read not least because of how everything in that part of the world changed radically within months of their publication.)

In China, we plan to visit Hong Kong, Shanghai and Beijing before starting our Silk Road Odyssey in Xi’an. I’m still researching the practicalities of navigating the Northern or Southern routes around the Taklamakan Desert. My crazy husband thinks it might be fun to take a 40+ hour train ride from Xi’an to Urumqi. I have no intention of putting myself through such misery and will most likely fly (with the boys) from Lanzhou to Urumqi re-joining the traditional Silk Road at Turfan. Currently, I’m fascinated by everything I read about Kashgar and even though I think it would be insane to follow Marco Polo’s route across the Pamirs into Afghanistan and Pakistan, if it’s at all possible we are planning to go east to Tashkurgan to do some hiking before doubling back and heading into Kyrgystan.

You know you’re really going to be off-the-beaten path when the most recent newspaper article you can find about the area you’re planning to visit is six years old. Just knowing this has my adrenaline pumping. (There’s at least one blogger writing about this area, so it’s not that far off the grid either.) There’s no doubt in my mind but that this part of our trip is going to be really challenging to plan – the myriad of visas and permits needed are just the start of the fun. But even at this early stage I am also sure that this is going to be an incredible experience. Check back in a week or two when I’ll be writing about the path we plan to take from Kashgar to Damascus – this time following in the footsteps of Alexander The Great*.

*I don’t think History will be a difficult subject to cover in our home-schooling activities!

3 thoughts on “Western China And The Silk Road”