Perspective is the word that comes to mind when I think about Suzanne Collins’ excellent Hunger Games trilogy. The perspective of child versus adult, poor versus rich, city versus country, weak versus powerful, winner versus loser, participant versus spectator. In the post-apocalyptic world which Collins so vividly describes in the Hunger Games all of these perspectives are important to the story of the young heroine, Katniss, her family, her city and her world. BigB, my 11-year-old, found these books as riveting as I did but he also found himself immersed in a world which challenged his ideas of good and bad, right and wrong, fair and unfair. This led to very deep discussions on every aspect of the gladiator-style games which are the central focus of the Hunger Games‘ plot but disturbed him enough that he’s decided “not to read the Hunger Games again – for the moment anyway”.

I Am Number Four is the 1st book in a new series which has a similar warrior-youth theme but is set on Earth and draws a simpler line between good and bad making it suitable for a tween who might find the Hunger Games too much.

I’ve always been of the opinion that reading about a place before you visit is a good idea particularly as a way to introduce a new country or culture to a child. Vietnam and the Vietnam War posed an interesting challenge. The diarist in The Journal of Patrick Seamas Flaherty is a combat soldier. The war scenes, living conditions and tensions between black and white soldiers are brought to life with a true but light touch typical of the My America series. This is a perfect introductory book on the Vietnam War for an interested tween.

Rock and Roll Soldier is a memoir. Both my boys found it a fascinating and sometimes funny read. Most of the story happens away from front-line combat which is a good thing because it allows Ellis to describe Vietnam as it was during the war for ordinary Vietnamese people including soldiers trading with locals (for instruments) and romances between local girls and soldiers. BigB found Ellis’ perseverence – and subsequent success – in forming his band “even in the middle of a war”, inspiring.

I found Into The Abyss: An Insider’s History of the Cold War a detailed memoir on the political and military situation in the U.S. after WWII which gave me plenty of data with which to answer my kid’s questions on U.S. involvement in South-East Asia and the Vietnam War. Matterhorn is a novel about a Marine regiment serving in central Vietnam in 1969. The author manages to weave subtle threads of politics of war with a gripping story on the humanity and inhumanities of war.

This book will be shocking for any boy living in a typical household in the US, Europe or Australasia. Shocking because of the life and lifestyle described: war, famine, disease, lack of access to education. This is a heavy book but inspirational. It is perhaps best read with a parent so your child doesn’t become overwhelmed by the differences between his comfortable life and the struggles described by William Kamkwamba. But, in finishing this book your child will be able to share – even if it’s in a very small way – with the author’s elation at the success of his invention and subsequent worldwide acclaim.

My boys don’t just read heavy, challenging books. In the past 10 months there’s been plenty of Rick Riordan, Christopher Paolini and various other Young Adult fiction, not to mention endless online fan-ficts and webzines. That said the following books also deserve an honorable mention and inclusion on any list of decent books for tween boys:
– The Power of One
– The Hotel at the Corner of Bitter and Sweet
– The Book Thief
– The Last Manchu

You can find my previous books for tween boys recommendations here. 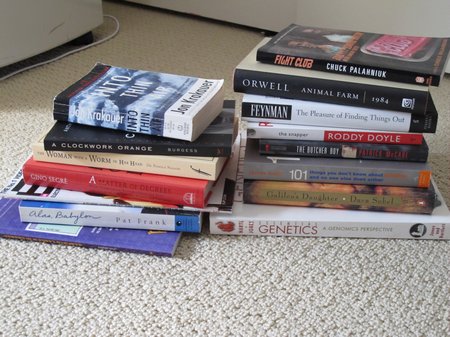 I am struggling with deciding on reading material for my children for during our family world trip. If you know me, you will understand that this is particularly annoying a) because I love to read and can easily rattle off suitable titles for any child, any interest, any age (it’s my own personal rain-man habit) and b) because I like to check my to-do boxes. We’re six weeks from leaving and I have something I can’t tick off. This is very, very stressful.

Why is this happening? Well, firstly because my children are very independent and equally strong-willed (I wonder where they got that from?). Neither of them likes anyone telling them what to do particularly when it comes to choosing what to do to relax i.e read a book. Secondly, I’m their mom. This is a disadvantage in understanding the relaxation needs of a teenage boy. I’d be the first to admit that I have no clue in understanding what such a creature needs to read to chill out.

So I crowd-sourced. I reached out to friends and asked for their suggestions and ideas. I am hugely indebted to my friend Stuart for sending me a long and detailed list of books. I appreciate that my buddy Barry took the time from his busy tech-start-up day at Opscode to send my his ideas.

Many of the books recommended are books I know and love but many more are books and authors I’d never heard of – which is something I’m used to since I realized a long time ago that although I loved Milly Molly Mandy in grade-school in Ireland, that doesn’t mean that my parent-peers in Seattle either (a) had ever heard of those books or (b) thought they were any good. I’ve started a shared list of books for teenage boys on Amazon. I’ll keep adding to it as I parse through the recommendations I’ve received through email and facebook.

I’ll also be sharing my tween-age boy recommendations next week. If you want to add to either list, leave a comment below.