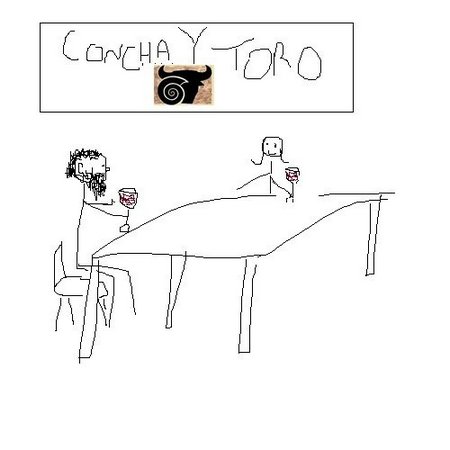 (Our camera was stolen the day before we visited Concha Y Toro. The picture above is my husband’s rendition of our tasting experience.)

We like to drink wine in my house. In fact, I’d go so far as to say that we love to drink wine. We’ve toured vineyards in Napa and in Walla Walla and my kids, although not really fans of waiting around while Mom and Dad swish and swill reds and whites, at least know the drill.

I had been planning to wait until we got to Argentina before subjecting them to wine-touring but Concha Y Toro (http://www.conchaytoro.com) is just outside Santiago. We could get there on the metro. We could do a day trip to get out of the city for a few hours. It seems wrong not to go.

There are plenty of companies offering winery tours from Santiago but, sticking to our usual cheap-and-cheerful independent tourist style, we headed off on the metro. Once we got outside the metro station there were a line of taxis offering to take to the wineries. I thought that was a fine idea. A short taxi ride would be direct and cheap, right? Murph had other ideas. We took a bus which, it turned out, was going in exactly the opposite direction from where we needed to go. We took a little tour of the less savory areas in this suburb before getting off, crossing the road and hopping on the next bus taking us back to where we’d started. Terse, cross words were exchanged. We got a taxi.

All wineries are fun to visit, with open spaces, lines of vines running straight as far as your eye can see and usually, sunshine. What’s not to like? The Concha Y Toro winery was no different. And there was no charge for the boys to visit. Since we only had to pay for two, we chose the more expensive tour option which included a sommelier-led tasting session. The day was starting to take on a much more pleasant tone.
The tour started with a short (promotional) movie about the winery, the brand and the story behind the Casillero del Diablo name. Following this, the guide took the group on a walk in the grounds, showing off the original buildings and the expanse of the on-site vineyard.

After tasting a little Sauvignon Blanc we headed into the famous cellars. There was a little showmanship around the appearance of the “devil” – as in Casillero del Diablo, the devil’s cellar, get it? It might have had more impact if the story had not already been told in the earlier movie. The kids got a kick out of being in a dark old cellar with the lights off though. (The story goes that Don Melchor, the founder of Concho Y Toro was peeved because people were stealing his reserve wines so he put out the rumor that the devil lived in the cellar where the wine was stored. This being earlier, more superstitious times, the rumor worked and his precious reserves were left alone.)

The tasting session was excellent for two, no, three reasons. Firstly, the wine. Duh. But I like calling out having 5 wines to taste (in generous pours) at three in the afternoon as a good thing. Secondly, the wines were paired with a fruit, nut and cheese plate. The cheeses themselves were not anything to write home about but having snacks to munch on gave our boys something to do (and slaked CAM’s bottomless teenage boy hunger at least a little). The third and most important reason why this tasting session will stand out as a worthwhile experience was the sommelier. A friendly young woman, she obviously knows her wines well and led us through tasting each one. So far, nothing unusual. She did make a point of asking us to leave “a good amount” in the red wine glasses. Then, after the initial taste of each wine, she led us through an exercise where we compared particularly the nose of each of the red wines. It was incredible how the aromas were immediately more discernable when comparing the wines side-by-side. The aromas which have always been elusive to me literally jumped out of the glass. Who knew?

We tasted the wines from the Marques de Casa Concha brand.

One thought on “Visiting The Concho Y Toro Winery”