Sydney’s excellent beaches were the most appealing part of our recent trip for my children. And finding a good beach in Sydney is not a difficult thing to do. My boys had a blast jumping in waves, taking surfing lessons and generally goofing around on the shore. Our days at the beach were the most fun for me too since the boys self-entertained for hours in the surf, ate all day like there was a famine at their heels and came home suitably tired from their water play so that they were calm all evening and slept well. Given that their baseline is hyperactive this was a huge deal for me as a solo-traveling parent. 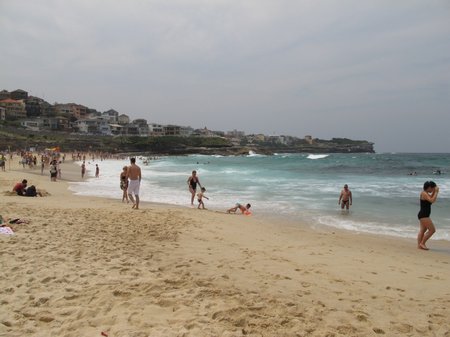 Bronte Beach
Our second day in Sydney was a Sunday. Our hosts had had grand plans of taking us to Palm Beach – about 40k north of Sydney – and eating at the stylish Barranjoey House. Plans were hastily revised on Saturday afternoon when we learned that local temperatures would top 40c/104f the following day – not an optimal day to be in a car with two squirmy tweens and one fussy infant. We opted for the closer Bronte Beach instead. Predictably, my sister got lost on the drive over (all that knowledge of back-road shortcuts in Ireland is worth naught in Sydney’s city traffic), but that gave me a chance to catch a glimpse of the famed – and busy – Bondi Beach from the top of the headland. I think that’s when I really started to get that “I’m on vacation” feeling.

Bronte Beach has lots to offer for families. The beach itself backs onto a park with play structures and bbq facilities. There are showers and changing rooms at each end of the beach, there are plenty of lifeguards on the beach and flags denoting safe areas for swimming and playing. Younger children might be nervous of the surf at Bronte since it’s pretty rough. I can testify to this having been caught off-guard by a wave and thereafter coming up in a very ungainly fashion, sand dripping from all kinds of places. At the same time, there were plenty of children in the three to five age group playing at the shore and having a whale of a time running away from the surf and back into the water between waves.

There are plenty of cafes along the access road to the beach and park. We had a tasty and wholesome weekend-late-brunch at the Bogey Hole Cafe. This cafe also gets great reviews on eatability.com.au which seems to be Sydney-siders’ online restaurant bible. The cafe is tiny, but the staff is friendly and the menu simple with plenty of kid-friendly options. 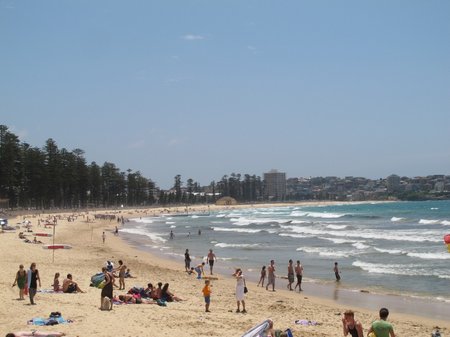 Manly Beach
The next time I visit Sydney I think I’ll look for accommodation in Manly. The ferry from downtown Sydney is a short 30 minutes, it runs regularly all day long and offers spectacular views of the city and the harbor (and, yes, the Harbor Bridge and the Opera House). Even though it’s a suburb of the city, when you’re sitting on the beach at Manly, it’s easy to feel as if you’re at a resort away from all the stresses of everyday life. The Corso is an Italian-style promenade. On one side, there’s a wide paved pedestrian path just next to the beach and on the other, there’s a long street with cafes, restaurants, gelato shops and yes, souvenir shops.

My boys were intrigued by the school groups in matching rash guards taking surf lessons at Manly, even admitting that yes, having surfing as part of your P.E. class was pretty cool – a big step for “we love the rain” Seattlites. This, of course, was perfect timing for me, since I needed to get them up and out super early the next day for their surf lesson.

If Manly Beach has a drawback, it’s the lifeguards’ frequent warnings and reminders to stay between the flags delivered over loudspeakers. It’s just a little disconcerting but since there are dangerous currents in the area and the surge and undertow is quite strong, it’s obviously necessary. On each of our beach days I had a hard time convincing BigB that he needed to stay nearer to the shore and within the flags for his own safety – you can imagine his vehement “No, Mom, I can swim” exhortations. At least on Manly it felt like every time he put a toe over the red-and-yellow flag-delimited line he got a personal announcement to get back where he should be. And I got to read my book for a while. 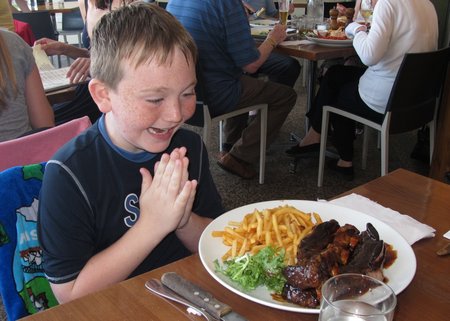 We actually spent Thanksgiving Day at Manly. There wasn’t a single turkey dinner to be found but that was OK – at least for BigB who found “the best ribs ever”. 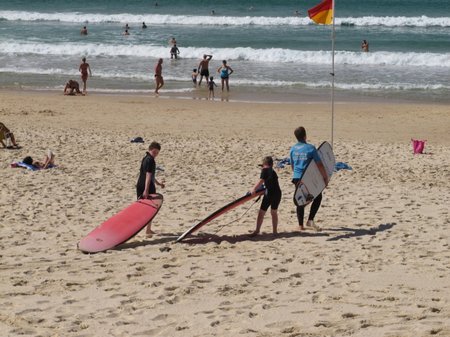 Bondi Beach
Our morning at Bondi was the high point of the trip for my boys. I was scheduled to take the lesson with them but my good sense prevailed at the last minute when I realized that they would be more likely to follow the instructor’s directions if I wasn’t around. And, by the way, who would take photos if I was in the water?

Even with that, I was nervous about the experience. From BigB’s initial refusal to put zinc cream on his face (as extra sun protection) to CAM’s tactical sensitivities about having to wear a loaner neoprene wetsuit, the potential pitfalls were numerous. I shook the instructor’s hand, turned tail willing them to have a great time and watched from a distance. They had a blast.

Let’s Go Surfing was the only surf school I saw operating on the beach at Bondi that day. Their shop/office is on a small street on the far north end of Bondi just across from the Biddigal Reserve park – a convenient and shaded area where we had a picnic lunch. I was impressed by the level of organization demonstrated by Let’s Go Surfing. There were at least three school groups and a couple of other private lessons in session while my boys took their lesson. We were offered right-sized equipment, gear storage and additional sun protection within 5 minutes of walking in the door of their admittedly tiny shop/office. I can’t speak to the instructor’s skill but his encouragement and enthusiasm obviously hit home because for the rest of our vacation my children begged to take another surfing lesson.

Our surfing lessons were provided compliments of Tourism NSW. Thanks for a great morning folks!

Watson’s Bay
Camp Cove beach in Watson’s Bay was the only beach we visited which I thought would be suitable for very young children. It’s a quiet, secluded cove with little or no surf. I can easily imagine my sister and brother-in-law enjoying this beach with their toddler this time next year. My boys, on the other hand, had been spoiled by the adrenaline rush of the surf at Bronte, Manly and Bondi and were largely unimpressed by this little beach.

The ferry ride to Watson’s Bay is pretty and it’s an important historical site since this is where Governor Phillip first landed in Australia and it’s Australia’s oldest fishing village, having been established in 1788.

CAM’s high point of this day was walking with his aunt and new cousin to the top of South Head. You’d think he might have been interested in the history or even the view. Nope. Not my geek boy. Instead Trish got a lecture on genetics as CAM worked out the probablility of whether LittleL’s still-blue baby eyes would eventually be green or brown – like his Mom or Dad respectively. 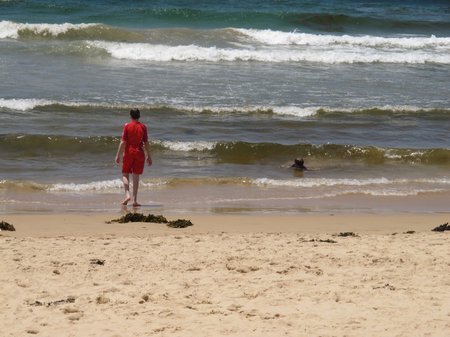 Information on planning a visit to Australia.

7 thoughts on “Sydney With Kids: The Beaches”