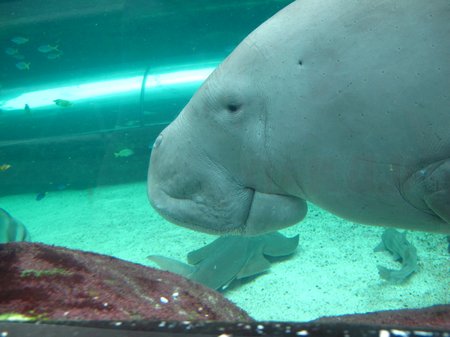 I’ve already said that my boys rated the beaches the best part of our visit to Sydney and that our visit to the Powerhouse Museum was great fun, very educational and very good value. As with any vacation with extended family, we spent a lot of time hanging out and enjoying each other’s company. That said, we did visit three other family attractions in Sydney which are worthy of note.

Sydney Aquarium
By the time I finished paying for us to walk into the Sydney Aquarium I was teetering on the edge of a major mommy meltdown. My children had put up a full-scale “No, I won’t go, you can’t make me” argument to the proposition of visiting the Aquarium. I won’t bore you with the details. Let’s just say that they railed, I held firm, they pushed some more, I cajoled and pleaded and then, in a last-ditch appeal to their fondness for their new cousin, I pointed out that it would be LittleL’s first visit to the Aquarium and wouldn’t they want to be part of that experience, since, who knew, it could be years before they saw him again? A little underhanded I know, but better than bribery – if only marginally. We were a grumpy crew passing through the Aquarium turnstiles.

Within five minutes BigB exclaimed, “Wow! This is the best Aquarium ever!”.

At AU$85 (US$77) for a family ticket, I think the Sydney Aquarium is expensive. That said, the Dugongs and the oceanarium easily make the visit worthwhile. The exhibits are organized into Southern Rivers, Northern Rivers, Southern Oceans and Northern Oceans – not that this really matters when you’re chasing kids around a dimly-lit room with sharks swimming overhead. CAM took countless photos of the platypus and we got to see the dugongs happily chomping on monster heads of lettuce. LittleL won’t remember this visit, but I’m sure his “big boy” cousins will be happy to remind him of what he missed while he was fed, burped, changed and fed again. 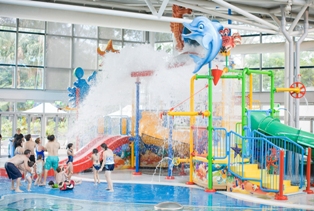 Sydney Olympic Park Aquatic Center
If I told you I spent AU$22 (US$20), got to work out, got to watch my kids play happily, had a coffee and read my book in peace for an hour I think you’d agree that was a pretty good deal, don’t you think? That was our afternoon at the Sydney Olympic Park Aquatic Center. When we visited Melbourne in 2000, I swam some laps in the Melbourne Olympic Aquatic center and thought I’d died and gone to heaven (I know, it doesn’t take much to make me feel special). Visiting the Olympic facilities in Sydney was definitely on my must-see list for this trip.

My boys were not as enthusiastic as I, but a picnic in the sun outside the pool complex perked up their spirits. Not being inclined to consider swimming laps fun per se, they were initially under-impressed by the water playground. But I was on a bit of a mission and so I shoo-ed them off to check out the slides, fountains and rapid river in the playground and generally left them to their own devices. By the time I finished my “fun” and went to check on them, they were having a blast. There’s a gigantic bucket atop the water playground which fills with water, and, every 10-to-15 minutes, dumps said water onto the decking and pool below. Apparently that’s all that’s needed to keep a whole bunch of kids entertained for hours. And lying on the deck waiting to get cold water dumped on you seems to be the new best way to make friends with other kids in a pool. Who knew?

All-in-all a very fun three or so hours. I had to bribe my boys with food to to get them out of the pool. Even though the Sydney Olympic Park Aquatic Center is a fair distance from downtown Sydney (30 minutes in the car or 45 minutes by ferry), I highly recommend checking it out. 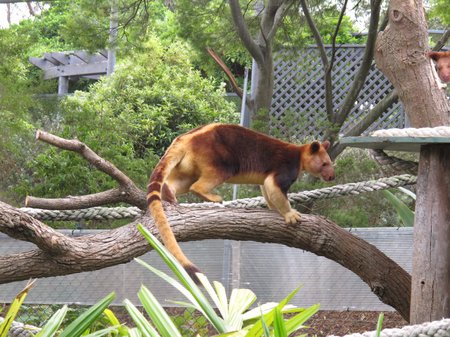 Taronga Zoo
For me, Australia’s flora and fauna are a big part of what makes Australia different and interesting. Traveling as a solo parent, much as I might have liked to get my kids out of the city and into the wilds to see animals in their natural environment, that really wasn’t a practical option. The Taronga Zoo was the next best thing – and it is an excellent zoo.

As you enter the zoo (at the main entrance), the path splits, with Australian animals to your left and Asian and African animals to your right. The paths merge at the bottom of the hill at the Southern Oceans exhibit (the seals and penguins). We stuck to the left path and saw koalas, wombats and plenty of exotic birds. Unfortunately, the kangaroos were really not in the mood to see us, but after check-ing and re-checking that exhibit area we finally got to see a Red Kangaroo.

The Backyard to Bush exhibit is hands-down the best integrated presentation I’ve ever seen on how humans and animals co-exist, educating about animals which live in and around our homes – from insects to domestic pets – and highlighting simple ways in which we can all be more environmentally friendly. The garden has a pit toilet, a recycling station and a kitchen garden with information on how co-planting helps plants and animals. This real home in the zoo then leads into a petting zoo with a playground for younger children.

The big – and surprise – hit of our visit to Taronga Zoo was the wombat enclosure. As I was ooh-ing at the sleeping wombats, BigB disappeared out of sight. Thankfully, he wasn’t too far away. Towards the end of wombat area, tucked into an alcove which you’d easily miss, there is display showing animated videos of stories of animals in The Dreaming. I’d been looking for a way to introduce this important part of Australian culture to my boys, but there hadn’t really been an opportunity. Both boys were fascinated by the stories (I’m sure the animation helped) – so much so that within days we were in a bookstore picking up some books of these stories as souvenirs of our trip.

Information on planning a visit to Australia.