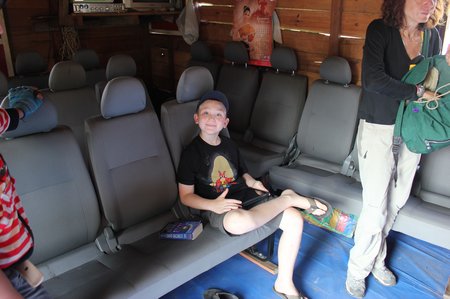 When we boarded the slow boat from Huay Xai to Luang Prabang, a two-day meander down the Mekong River, there was acres of space aboard. Silly Lonely Planet with their tales of over-crowded boats! 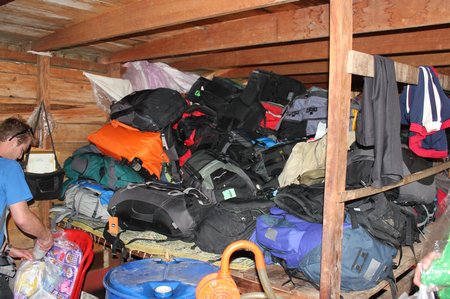 Although, maybe we should have guessed that when the luggage area started filling up and there was still plenty of empty seats that things might not be as they seemed.

People kept arriving at the boat dock and the staff kept piling them on in – even with loud protestations from the existing passengers.

The comfy-looking seats you see in the photo were actually benches of 2, 3 or 4 seats. Unfortunately none of the benches were affixed to the boat and so as people moved onto the boat (and had to sit on the deck at the front) and as people moved around in their seats, the crush worsened. The posted departure time was: “11 – 11:30” – a perfect example of “Lao time”. The operators made an announcement saying that there would be a delay until Noon to wait for more passengers but even after those passengers had arrived, there was no sign of the boat leaving. An hour later it seemed as if a backpacker tour bus had disgorged of all it’s passengers on the dock and every single one of them was intent on boarding the boat. Mayhem erupted among the squished who were already aboard, those eager to catch this boat rather than waiting a day in Huay Xai (not a very pretty place) and the staff who only wanted to squeeze as many people as possible on to their boat. Eventually we left about two hours after the expected departure time. There were many (Murph included) who decided that the only way to deal with such a crappy situation was to have a beer (or three). Interestingly, the little store aboard the boat only seemed to sell beer – and they did a roaring trade. 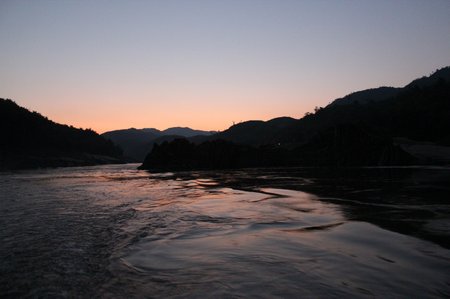 This sunset in Pak Beng (our half-way point) almost made the stress of the day worthwhile.

If you’re ever considering taking the slow boat between Luang Prabang and the Thai border I strongly encourage you to consider going from Luang Prabang to Thailand rather than the more common opposing direction. The boats going upriver were largely empty with less than ten passengers aboard. Next time we’ll know better.