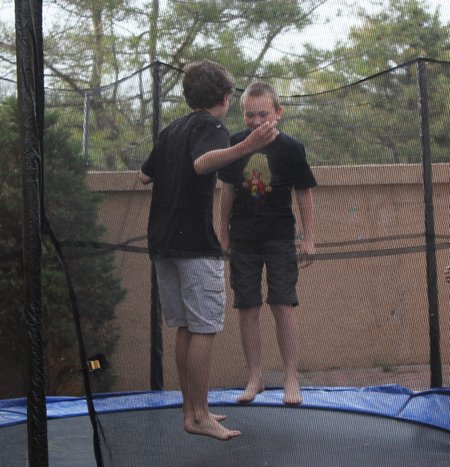 We’ve all had our ups and downs during this trip but just around our 7-month anniversary BigB’s downs were getting longer and more frequent. My social child was starving for kid company.

Through my blogger friends network, I reached out looking for a potential playmate for him in Beijing and was put in touch with a very generous and friendly American family who are currently living there. We took a taxi to their house on May 1st to join their holiday BBQ. As we pulled into their neighborhood on the outskirts of Beijing, CAM exclaimed: “Hey, it’s like a mini-America” and indeed with white kids on bikes and basketball hoops and narrow residental streets lined with single-story houses it could have been suburban Anywhere U.S.A.

After an evening goofing on the trampoline with other English-speaking kids and a healthy dose of Phineas & Ferb and other kids’ cable TV favorites, my boys were like new children, re-energized and smiling.

I was a little worried that the surprise that I’d lined up for them – a day at a local international school with their new friends – would kill their good humor. They were both more than a little nervous at the prospect but curious enough to know what an “international school” really meant and eager to spend more time with peers that they didn’t put up a fight. BigB’s face was white with worry as we waited in the school reception area but grinning from ear-to-ear by the time he and his “host” buddy disappeared into the classroom.

As I walked CAM over to the High School area he mentioned that this would be his first real day of high school – since he should have started at our local high school in Seattle in September but, because of our trip, obviously hadn’t. I wasn’t sure if he was nervous or not. We passed a bunch of seniors on the way to the right home-room. I was so thrown by the fact that my baby had now passed into this world of almost-grown-up kids that I completely forgot to worry about him. He seemed not to even notice. From a kid who retreated into himself in any social situation a couple of years ago, here he was now, confidently shaking hands with a strange teacher in a strange school half a world away from home. It was shocking and excellent all at the same time.

I spent the day at the Forbidden City indulging in historical, arty tourism at its’ best. When my kids are older they can take themselves to Beijing to see it. I’m sure that given the choice over, they’d pick a day at school every time.