We arrived in Al Sulaymaniah in the mid-afternoon. Guess what? It was hot. Dry desert hot with the sun burning down in a way that makes a body want to find even a tiny piece of shade and hide until after sunset.

I was still dressed for Iran (i.e. covered from wrists to ankles). I Could Not Wait to get myself into a shower and change into proper, lighter, shorter, summer clothes – the things that had been stuffed in the bottom of my backpack during the whole time we’d been in Iran.

We’d met a local family at the Iran-Iraq border crossing. The Dad had recommended a hotel in Sulaymaniah – he knew the owners. With no guidebook, no internet and an eye on safety we just went with that recommendation even though when we checked in we learned that the price was more than a couple of notches above our usual basic backpacker level. But, the premium bought us a standard Western business hotel with (oh joy!) hot American-style power-showers.

I came back downstairs to wait for my husband and boys in the lobby – this woman is usually first ready in our family. The lobby was empty except for the desk staff, me and the furniture: two long leather sofas and a bunch of easy chairs around a glass coffee table. I settled on one end of a sofa, my flip-flop dangling on the end of a short-skirted bare leg and my arms, neck and shoulders ready for sun in a simple black tank (looking just like this, but without the boat or the ocean).

I turned my head at the whoosh of the hotel’s automatic door. What happened next was a study in cross-cultural impressions and similarities.

A group of about eight men, all tall, had just got out of a pair of imposing black SUVs and were filing into the hotel lobby.
“Gulf Arabs”, I thought, based on their dress. It was an easy guess since the dress style is fairly unique: a long-sleeved, full-length white dress (called a Thoub) and a checked headscarf (called a Shumag). When I was in college we referred to those as “Yassir Arafat scarves”. Gosh, that was so long ago now. I slipped into a little reverie about my college days, smiling to myself about being young, foolish and too broke to eat regularly but always able to find money for a pint of Guinness if the crew was heading to a bar.

White dresses lined up on the sofa opposite me. Politely, I pulled in my legs and made myself smaller on my sofa, assuming that the group would spill around the coffee table by the time they’d all checked in. They seemed to be moving as a group.
Another one successfully checked in and he perched himself on the side of the already-full sofa.
The lucky (or unlucky) next guy took one of the end armchairs.
Now this was interesting. Not one of them wanted to be the first to share my sofa. There was a pair of particularly bushy eyebrows sending disapproving looks my way. I wondered which was more offensive: bare head, bare legs or bare shoulders?
“Oh well. Your baggage, not mine.” I thought and relaxed back still waiting for my boys to show.

The elevator pinged and BigB came running over: “You look like yourself again”.
This kid had really had a hard time with me in Islamic dress. I am stern to start with. With a headscarf, all the soft edges were gone and being all wrapped up in such hot weather made me grumpy to boot. His three-week living nightmare of traveling with my cruel stepmother alter ego was visibly over.
“Yes, and now we can do this again too.” CAM reached over and mussed up my hair.
I batted him away like my favorite pesky fly. You’d have to have been blind to miss the affection in all of this.
“Let’s go.”

I stood up, almost expecting to hear gasps of derision from the audience on the other sofa. I just had to take a surreptitious peak to see how they were reacting.

I might have been imagining it but I swear that the bushy eyebrows seemed less forbidding. It appeared that my boys had taken center stage and their universal boy-energy and tomfoolery was appreciated. There were smiles beneath some of the Shumags.

Well now. Maybe being a Mom made me less of a jezebel. 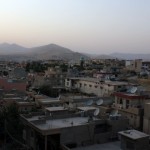 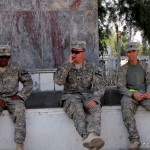 Soldiers on the Iraq Turkey Border 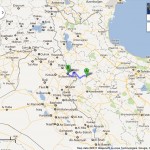