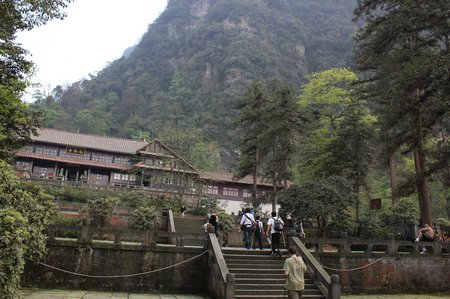 This is the temple where we spent the night on our 2-day hike of Mt. Emei (Emei Shan) in Sichuan, China.

The complex is pretty large and although the temple is not the most elaborate or picturesque on the mountain it did have decent rooms, a dining room and (drumroll!) hot showers. Our kids were happy just to stop.

The bathrooms deserve particular comment. They were the stinkiest that we’ve experienced not least because the water just washed the waste into a channel behind the temple where there was a nice build-up of months, maybe even years, of human waste. “Temple Toilets” is our new short-hand for the most basic and truly stinky category of facilities. 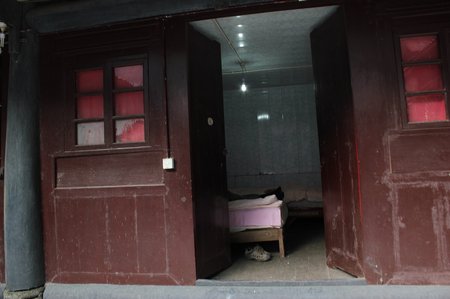 The sleeping accommodations were not four-star luxury, but they were comfortable. The mattresses were a little saggier than I might have liked and I was very glad that I’d packed our sleep sacks – the sheets were kinda-sorta clean.

But, if all of that sounds unappealing, it was insignificant compared to the serenity of the temple. Even though there must have been at least a dozen people staying overnight and at least as many staff and monks around, you could hear little except the wind in the trees. CAM, our problem sleeper, was fast asleep on his bed before 9pm. BigB and I rested with our books on the steps in the last light and all of us turned in early.

The next morning the temple bell sounded at 7amm and we were on our way by 8am. Based on our map, we thought we had a 30-minute, fairly flat trek to the next temple where we planned to get breakfast. That turned out to be entirely false. The trail started fairly easily but quickly plunged downwards in a long and steep incline and, after just one short footbridge, raced straight back up the side of the valley. I could complain because it was all really a bit too much before breakfast for any sane person – particularly for our boys – but the early-morning views of the mountain made every step worthwhile. The morning haze hung around the trees and the peaks like something straight from a classical Chinese painting. It felt good to be out and active and wrapped in silence (at least when CAM and BigB were not reciting sections of The Hitchhiker’s Guide to the Galaxy to each other). It was a priceless perspective on busy, urban, crowded China. 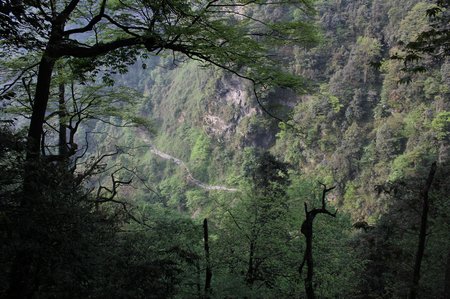 At the next temple we picked up pots of noodles which the boys and I inhaled. I can’t stand instant noodles. I hope to never, ever eat them again for breakfast but they fulfilled the need and sated, we were off again – the very cheeky monkeys at that temple and their attempts to steal our food from our hands notwithstanding!

Our pace was much slower than on Day 1 understandably, I think since we were all feeling the effects of yesterday’s uphill slog. There was as much, if not more of the same on Day 2 but by now we’d long passed the tour-bus drop-off points and the trail was pretty direct. I kept the map in my pocket and tried not to call attention to it lest one of our kids stage a “I’m not going any further” protest.

There were more monkeys to distract and amuse at each of the temples we passed. We stopped at the top of steep inclines and at the many little kiosks along the path for chocolate breaks – apparently Snickers and Dove bars are all you need to keep tween and teen boys going on long steep hikes. It was just after Noon when we reached the main bus plaza. Reason #3 why this hike was nothing like hiking in the Cascades where there are no concrete bus plazas with restaurants and cable cars at the top of the mountains. We stopped for a hot lunch and argued about whether or not we should take the cable car to the top. The kids lobbied hard, we even walked them to the ticket office but they couldn’t go through with the easy option in the face of their Aged Parents continuing the hike.

An Honest Confession: If I hadn’t been with my kids I’d probably have taken the cable car. In front of them I couldn’t in good conscience take a short-cut when I’m the one who’s usually lecturing them on “following things through” and “not taking the easy way out”. 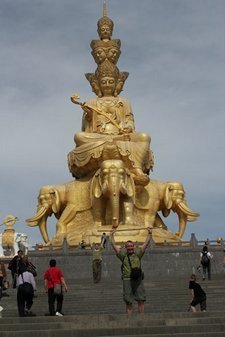 This last section of the mountain is very busy with many tourists (and pilgrims) who had taken the cable car up walking briskly down. BigB was a little annoyed at the thought that people passing us would think that because of our red faces and slow pace we were very unfit.

The top is pretty spectacular.
Both kids were intrigued by the grandiose statue and discussed complications with its construction – getting the men and materials up the mountain – at length.

We took the cable car and a bus down. That ride was worth every penny.

Trail Notes:
Cross-referencing the distances between temples on the maps we think we hiked about 32km the first day and 25-28km on the second day. These could be over or under estimated but it was still a challenging hike.

One thought on “Hiking Mt Emei in Sichuan China – Day 2”