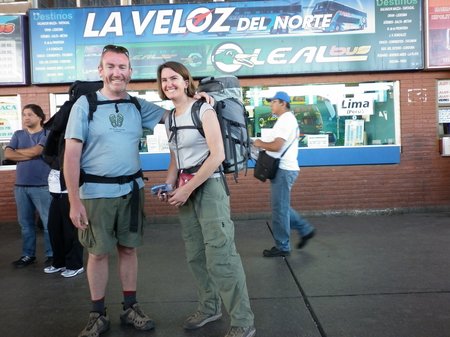 With eight days to go in South America and flights out of Lima (on December 20th), we were still in North-Western Argentina and reluctant to leave without visiting the Quechua villages in the Quebrada de Humahuaca. Working backwards from the 20th, it seemed that we needed to leave Jujuy on the 15th at the lastest and if we subsequently did not have any issues crossing borders between Argentina, Chile and Peru we might just also be able to squeeze in a short visit with a friend in Lima. Passing through Jujuy on December 12th, we bought tickets for the journey from Jujuy to Calama in Chile and headed North to explore Tilcara, Humahuaca and Pumamarca.

Before leaving Jujuy, we found an agent who could sell us tickets from Calama onward to the Peruvian border. Well, she couldn’t, but her contact at Salta could, so as we watched she transacted our purchase using Windows Messenger. She also couldn’t issue the tickets but as we paid she assured us that the bus driver coming from Salta would bring our tickets with him. It was a purchase with a bizarre mix of internet-age technology on the one hand and old-style delivery methods on the other.

Our 48-hour odyssey started on December 15th when we left Jujuy on the 8:45am bus to Calama. 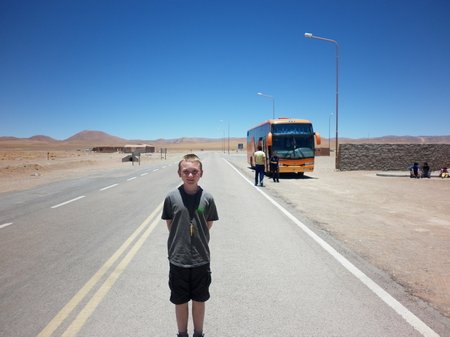 The Argentina-Chile border crossing between San Salvador de Jujuy (Argentina) and San Pedro de Atacama (Chile) is in a barren, sun-blasted stretch of desert. After the usual off-the-bus, line up, show-your-passport, have-your-bags-inspected routine, it was actually refreshing to get back on to the air-conditioned bus. The same routine was repeated at the Chilean border post about three hours later. Again, the cramped bus seat was more inviting than standing around in the hot, desert sun.

Phase two of “Project Leave South America” proceeded without interruption. After a short (three hour) layover in Calama we boarded the overnight bus to Arica. 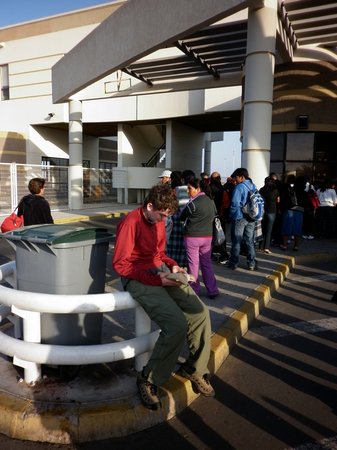 By the time we reached the bus station in Arica we were all starting to flag a little. Murph wanted to buy tickets from Arica direct to Lima with a local (Chilean) company. I dug in my heels and insisted that nothing but the relative luxury of Cruz del Sur would suffice which meant that we had to get across the Chilean-Peruvian border to Tacna and buy tickets from the Cruz del Sur agent there. We joined the lines of people waiting to be processed through said border as the customs and passport control officers started their day. It was all a bit of a zoo really and it was only 8am and we’d been on buses for 21 of the past 24 hours, but CAM, with book in hand, was nonplussed. 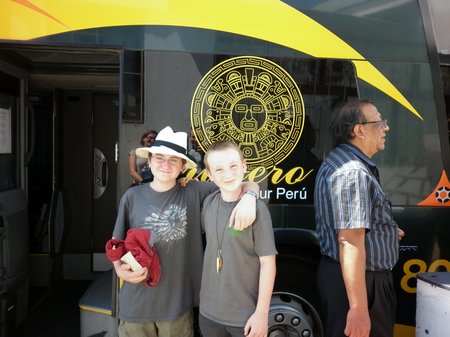 The gods must have been smiling on us: on arrival in Tacna we picked up tickets for the overnight bus to Lima and the friendly Cruz del Sur agent checked our bags. Yipee!, Phase Three planning completed successfully. We had nothing left to do but kill time (six hours to be precise) until departure. Tacna is a fairly boring, normal, work-a-day town. We went downtown and whiled away our hours in the best tradition of modern backpacking travelers: we had coffee, we each took a terminal at an internet cafe for an hour and we had ice-cream. The boys were still smiling as we lined up for the last leg of the journey. I was dreaming of the long, hot shower I would have at my friend Ericka’s house. 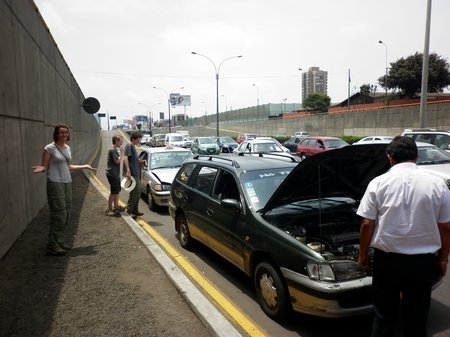 Fender-Bender! On arrival in Lima (now we really were stinky backpackers!) we picked up a taxi to take us to Ericka’s. We were not 10 minutes out of the bus station when the taxi screeched to a halt inches from the car in front of us only to be then whacked from behind in a classic freeway fender-bender accident. Luckily, no-one was hurt. Murph and I were fascinated, maybe even proud, that CAM and BigB calmly climbed out of the crumpled taxi and wanted to know how the accident had happened and why one of the drivers (a young woman) had such excellent English. After four months traveling around South America they were definitely becoming experienced road warriors.

We relaxed for two fun days by the beach south of Lima. A fitting and relaxing end to a fantastic South American experience.

The next two days passed in a blur of airports. Lima, San Jose, Los Angeles, Auckland, Sydney. Strangely, since airports are so similar all over the world the check-in counters, security check-points and gate lounges felt like an airlock between worlds as we passed from the rustic, ancient beauty of Northern Argentina to the glass-and-steel modernity of Sydney – to Christmas and family.

2 thoughts on “From Argentina to Australia”