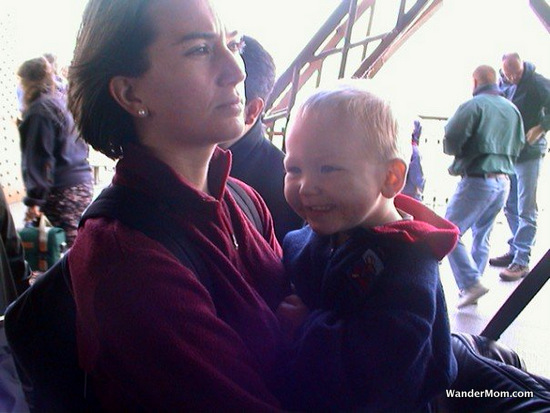 Paris with teenagers. Sigh. I can hear you all sighing at the idea of Paris in a very “we’ll always have Paris” way. Me? I’m wondering what to do with two digitally-obsessed teens for a week in Paris. This is a new kind of family travel planning, but I’m always up for a challenge so here’s what we’re considering (with a little input from said teens).

1. The Eiffel Tower
This year we kicked around ideas for where to go and what to do for Thanksgiving with our boys and BigB announced “I’d love to go to Paris, I’ve never been*”. Ahem, honey, yes you have – here’s a photo of you and me on the Eiffel tower.

Given that he was only two at the time, we forgave his memory lapse and agreed that Paris seemed a fine place to go for a few days in November. Our first tourist stop will be the famous tower to jog his memory.

2. Pantheon
Not for the architecture. Not for the famous people buried there. No. Me and my geeks-in-training are going to see Foucault’s Pendulum.

3. Paris Catacombs
Yes, we’re going underground, no, not to go see pretty pictures at the Louvre, we’re going to look at the bones of six million dead Parisians. In a word macabre but I bet my kids will be more interested in spotting odd occipital structures than they would be admiring the lines of Mona Lisa’s famous face.

4. The Sewer Museum
You can’t go to Paris without visiting at least one museum and this is the one my kids chose. It’ll be different. I reserve the right to pass on this one and go spend some mom-time at the Musee D’Orsay (which, very conveniently, is just above).

5. Graves
Jim Morrison. Edith Piaf. Oscar Wilde. Samuel Beckett. There’s a lot of famous people buried in Paris. I figure we’ll indulge the teen cool factor with a pilgrimage to Jim Morrison’s bones and then trade that goodwill for a trip to Versailles.

*He actually also said ” and we could go see the places mentioned in The Sorceress” but since he read that when he was a very uncool 10, I’m only mentioning it here in passing.

Leave a note and let me know if there’s any other teen-friendly Paris sights or activities you think we shouldn’t miss. (But mention Disneyland Paris and I’ll un-friend you I swear).

3 thoughts on “Planning a trip to Paris with teenagers”