I did feel mean about waking my kids up at 4am to go to look at geysers. Honestly, I did. It seemed unfair to rouse them from their slumber.

Once woken though, they were champions, patiently and quietly waiting for the tour bus to pick us up from outside our hostel. That Murph had them in stitches telling them about a possibly missing or dead kangaroo in Dublin is testament to the power of humor – even at 4am with sleepy kids.

It was unbelievably cold at the geyser field, finger-numbing, bone-chilling, breath-freezing cold. We had been warned. The tourist literature had cited temperatures of -10C but basking like lizards in the desert sun just the day before, the magnitude of the change in temperature obviously hadn’t really sunk in. We did have hats and sweaters but we were still cold. The thermal undies that were in our packs in the hostel would have made a huge difference. Poor BigB didn’t have any warm gear because all his warm clothes had been in his pack when it was stolen a few days before. We’d picked him up a new pair of shoes in San Pedro de Atacama, but at the rapacious tourist prices in the town we hadn’t replaced anything else. We did some judicious clothes-swapping with what we had. In my (light) jacket, Murph’s hat and with some towels wrapped around his legs he was still shivering, but his lips had warmed from blue to almost pink again.

There is a reason for visiting the El Tatio geyser field before dawn. Before dawn, the ambient temperature is so low compared to the heat inside the geyser chambers that the columns of steam are starkly visible in the frosty air. As the sun rises, so does the temperature, steeply, to desert highs. This change in temperature means that the geysers are neither as active nor as visible later in the day. In the predawn light, when a geyser erupts – as a number did while we watched – the steam hangs densely over the ground in an eerie column. Every bubble and sputter from each of the 80 geysers in the field is clearly visible. It’s quite a show. CAM and BigB were entranced. Without a whimper about the hour of the day or how cold it was, they hung on the tour guide’s every word, asking questions and generally behaving like young geology students. 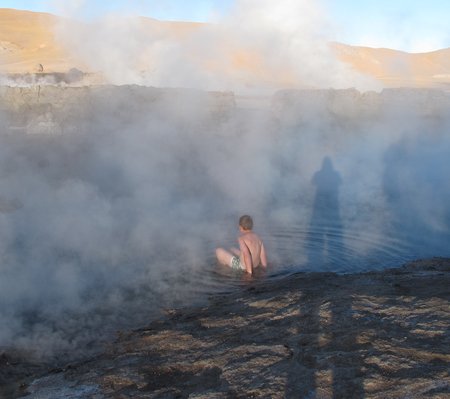 My kids reverted to normal kid behavior when we got to the thermal pools. It was not yet 7am, the temperature was below 0C, we were at 13,000ft in the Andes and my younger son raced out of the tour bus in his undies. Such is the appeal of a warm water pool to a kid. CAM, ever the reluctant, cautious one, hung back but seeing all of us enjoying the water he gave in and started to undress. What a metaphor for the challenges of travelling with kids: one child was the first into the pool, the other the last to venture his toe into the water, together they were the last of our whole group to get out of the pool.