I read about CBT Kyrgyzstan in my initial research on Kyrgyzstan. I filed it away as “Hmm, maybe, not sure it will work for us”.
By the time we got to Western China, nine months into our trip, the idea of spending a few days with a driver and staying in homes with all meals provided seemed very, very appealing. I sent an email to the folks in the Bishkek office.

The response was prompt, professional and friendly – as were all our interactions with CBT Kyrgyzstan staff.
I said that we were interested in hiking and horse-trekking.

The itinerary they put together included:
– a minivan and driver for nine days
– eight nights accommodation in homestay properties including all meals (strictly speaking it was just breakfast and dinner, but every time we arrived at a new house we were given a generous snack with soup, tea and cakes – at least).
– two days horse trekking in central Kyrgyzstan
– two days hiking near Lake Issyk-Kol
Total cost for four people: USD$2150 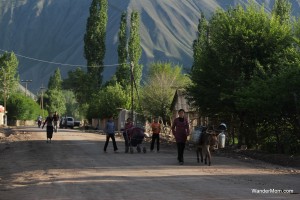 We spent most of our time on our CBT-planned tour of Kyrgyzstan in the sparsely-populated center of the country. We stayed in small villages with friendly families and ate like kings. The accommodation in larger towns such as Osh, Kochkor and Karakol was much like a simple Bed-and-Breakfast anywhere in the British Isles. In the rural villages, we slept on the floor in deep piles of traditional-style quilts. Bathroom facilities in these homes were very basic (usually an outdoor pit toilet) but scrupulously clean.

In Kyrgyzstan, it seems that there are only two decent roads: from Bishkek to Osh and from Bishkek to Karakol. All other roads are badly rutted and barely paved. In our first few days in Kyrgyzstan we had to spend long hours in the car but we were in the safe and very steady hands of Anatolyi, our Kyrgyz driver. Since Anatolyi spoke Russian, Kyrgyz and a little German it took a while for us to get to know each other. In our Eng-Ger-Russ pidgin he seemed bemused at our outdoorsy-ness. I made fun of his “Fahren, rauchen, schlafen” (driving, smoking, sleeping) lifestyle and he, good-humoredly, pointed out that I’d forgotten “Fernsehn” (TV) – which is what he usually did when we were off in the hills. 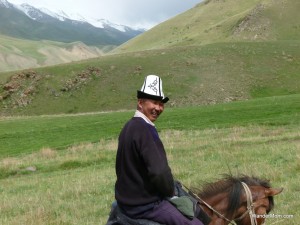 Our two days on the jailoo, the high mountain grasslands where the Kyrgyz keep and breed horses, were the most fun part of our time in Kyrgyzstan – not least because we were hosted by T, pictured above, and his extended family. CAM and BigB, initially reluctant to go on “yet another” horse-trek, found their inner horsemen within the first half hour and were off at a gallop.
“They’re not Irish, they’re Kyrgyz!”, said T. 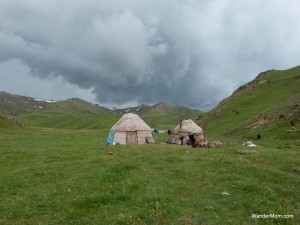 Breeding horses and summering in yurts up on high mountain pastures seems to be an important part of Kyrgyz culture. The kids, out of school for the summer, spend their time up here in fresh air, helping care for the horses and foals. On our ride up to the jailoo we passed many families at or constructing their yurts and the family we stayed with told us that by later in the summer they would have up to six yurts in this valley. This slow, pastoral, lifestyle was a bit of a shock to our boys but they rolled with it. By the time we left, they’d learned new ball games, played many rounds of tag with the Kyrgyz boys and, for a finish, pitched in for an early-morning tug-of-war.

Our last stay before hiking Altyn Arashan was Karakol, on the eastern shore of Lake Issyk-Kol. Karakol is a modern town with the usual blend of cellphone vendors, small grocery stores and internet cafes. The bland – and crumbling – apartment tower blocks felt very Soviet. It has both a Russian Orthodox church and an old mosque which has a unique blend of Muslim, Chinese and Russian architectural details. The mosque has an animated little guardian who, speaking only in Kyrgyz but making full use of his entire body to speak, managed to tell us all about the history and construction of the building.

We’ve only done a couple of guided, multi-day hikes but even by this measure, our experience with CBT Kyrgyzstan was excellent. Our guides carried enough food to feed a group twice our size – a good problem to have. The hike itself was easier than we expected. For more than two-thirds of the hike we walked along a river at a very modest grade and the hill to the cabins where we were to sleep was steep but short. You really can’t beat a hike that ends with lounging in natural hot springs.

If I get the chance to return to Kyrgyzstan, I will use CBT Kyrgyzstan again. Next time I might specify an English-speaking driver just for the opportunity to learn more about the country in conversations during long drives but that is the only improvement I can think of after an enjoyable week-and-a-half ambling about this beautiful country.

6 thoughts on “Community Based Tourism in Kyrgyzstan”