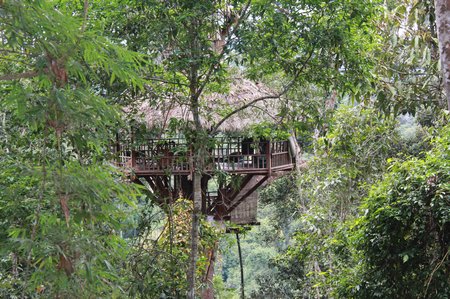 Arrival
It was just before Noon when we arrived at our Treehouse. I think it’s fair to say that all the adults in our group were relieved and excited at what we found. Reports of inadequate accommodation, bad food and vermin were quickly forgotten as we oohed and aahed at the scenery from our new home in the trees. It was definitely worth the steep trek uphill through the jungle from the nearest village and our first four zip-line experiences – even if BigB had been too scared to try all but the last on his own.

The staff from the nearest kitchen zipped across carrying our lunch. There was hot chocolate for the kids and tea and coffee for the adults. It seemed as if we’d found backcountry heaven in a remote corner of Northern Laos.

Missing
After lunch I decided to grab some quiet time while the rest of the group (two couples, Murph and our two boys) left with our guides to explore the trail system and do some more zip-lining. I meant to read but the forest sounds lullabied me into a short, deep sleep. I woke with a start not quite sure where I was. I was just getting my bearings when Murph re-appeared on the other end of the closest zip-line asking if BigB was with me.
“No”, I called back. “I haven’t seen him since you left”.

And Murph was gone. I sat back with my book. It was most likely a case of one of our children lagging too far behind or going too far ahead on a trail. I was sure they could figure it out without my help. Although, something kept me pacing around every so often just to see if anyone was coming.

Lost
Murph was back. There was urgency in his voice as he asked again whether or not BigB was with me. Standing on the platform about 50ft away, he explained that the boys had been zip-lining together when BigB had decided that he was done – about 40 minutes earlier. No-one had seen him since.
“Should I come help look?” I asked.
“No, stay there – in case he comes back.”

And then my husband was gone again, off racing around the unmarked trail system and across vertiginous zip-lines looking for our ten-year-old son.

Alone in the treehouse I had no clue what was going on in the search. I felt useless. Images of my baby wandering lost in the dense forest around me, or worse lying broken having fallen from a zip-line invaded my mind. With all my self-control, I wrestled the panic monster behind these thoughts and fought to keep myself calm. Time ticked by and I could hear BigB’s name being called out through the trees. I ached to hear an answering call.

CAM returned. Either nervous that he was going to be held responsible for losing his brother or just too worried to talk himself, he disappeared into the tiny Crow’s Nest.

Dusk was falling. Flocks of birds rustled in the trees, finding and settling on a perch for the night. The two girls from the kitchen came back with dinner, giggling and laughing. I don’t know if they even knew what was happening.

The two other couples, who were our companions in the treehouse, returned. There were hugs from the women but I think they found my icy calm disconcerting. They sat around the table, no-one touching the food, conversing intermittently in whispers. I felt dreadful. Full of dread and guilty. They should eat, really. I knew they were probably hungry. But my suggestions to eat were brushed away. At least they were able to tell me that all the treehouses (there are six) had been alerted about the missing child and that all the guides were involved in the search. That gave some hope. It wasn’t quite dark yet, maybe BigB would be found soon.

The part of my brain that knows about managing and resolving crisis situations (if only in IT terms) started working on scenarios: if he wasn’t found this evening; the size and scope of a search which we’d have to start at first light; injury; death. I had to shake myself back to calm. There was still hope.

It was dark when Murph came back to the treehouse. He could barely move from exhaustion. There was no need for words, BigB had now been missing for over three hours. We held hands and hoped. Marco, one of our treehouse-mates took Murph’s place on the search. Time ticked by and the darkness deepened. We held on and held steady but every once in a while the clasp tightened to a frantic clutch as we rode personal waves of imagined horror at the loss of our beautiful, affectionate, loving, funny child.

Returned
An hour later it was too dark to see but we heard the whirr of the zip-line. Marco’s face appeared at the landing platform, solemn. I gasped. No child. Really, this couldn’t be happening. I could feel my child in my arms but they were empty. My belly felt his small body nestle against me like he often did as a toddler but instead there was nothing. I would have collapsed into a mass of tears and panic if my husband hadn’t been holding on to me. We were holding each other up.

We thanked the guides for their efforts. Someone offered them food which they ate hungrily. Murph and I watched. Food is such a practical thing. Someone suggested that the search begin again at first light. More practicalities. I think I might have been shaking. It had been almost five hours since anyone had seen BigB.

And then there was a holler from the forest. Hoots. Cheers. We had no idea who was calling. Our guides, Tja Lee and Pa Lao had gone to the village about an hour earlier. It was too soon for them to be back. The zip-line whirred again and I saw a strange face coming across. The “OK” call was shouted and the next person clipped on at the other side. My baby, red-faced and sweaty, dirty and tired, but here. A long, tight, Family Hug.

The explanation was simple: he’d taken a wrong turn on his way back to the treehouse and once he knew he was lost, felt obliged to stick to the path which had led him back to the village. The people who had brought him back to us were guides on their day off, who had been resting at the village. Our treehouse-mates took on the necessary job of hosting and thanking these new guides, leaving us to hug our child closely in a quiet corner.
“I thought you’d chew me out.” he said.
“We would have if we’d found you much earlier.” my husband replied “now we’re just glad to have you back.”

Later that night, BigB talked me through exactly what had happened again. Once he knew he was lost, he had been terrified. He chided himself for not turning back up the trail. I reminded him that if he’d done so, he could easily have taken yet another wrong turn. He remembered the little girl from the village who’d found him on the path, and how the presence of one was equally shocking to the other. He told of the villager who’d offered him food and a bed to sleep in but, cuddling in to me, he said “I knew you’d be worried, Mom. I knew I had to get back.”

Just two days later the trail system was less mysterious to all and we were quickly becoming zip-lining experts. On our last day, we had wonderful massages in the afternoon and the grown-ups had Australian wine with dinner. We laughed about the drama of our first day in the treehouse. BigB was supposed to be sleeping underneath a Hmong-style mosquito net, a large, dark tent-like drape around his mattress. He overheard our conversation and called out:
“It’s just not fair. You got wine and massages and all I got was lost”.

12 thoughts on “Child Lost in the Jungle in Laos”