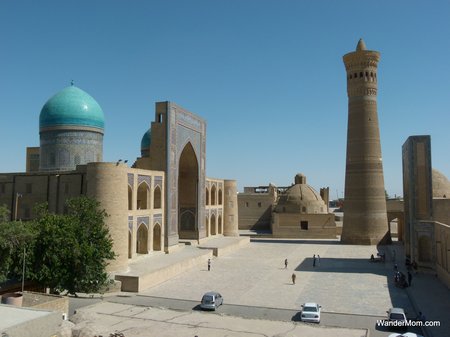 Another Bukharan historical oddity, the massive Kalon Mosque – rebuilt in the 16th century having been destroyed by our friend Genghis – was used as a warehouse during Soviet times! 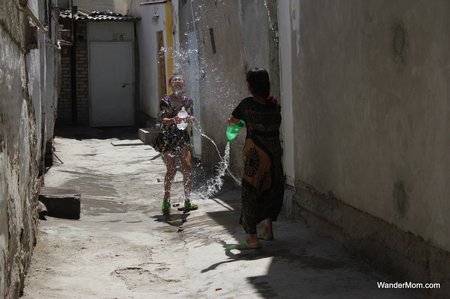 Bukhara is more challenging but more interesting to visit than Khiva. Whereas Khiva has a partitioned historical core, Bukhara is more higgledy-piggledy. Shops and homes lean up against centuries-old buildings, some reconstructed, some partially repaired and some in disgraceful disrepair. On our self-guided “tour” of the city we got completely lost in narrow backstreets like dried-out riverbeds through low canyons of mud-brick houses.

But hey, by getting lost we found a tidy little backstreet barbershop where my boys got a much-needed haircut. Expecting that the business would be transacted man-to-man in true Central Asian style, I sat outside in the sun. Curiously though, my basking was cut short because the barber insisted that I come in to direct how I wanted my childrens’ hair styled. I may be assuming too much here but I’ve read that in male-dominated Central Asia women rule the roost at home and, if this experience is typical, with all things kid-related – including haircuts. 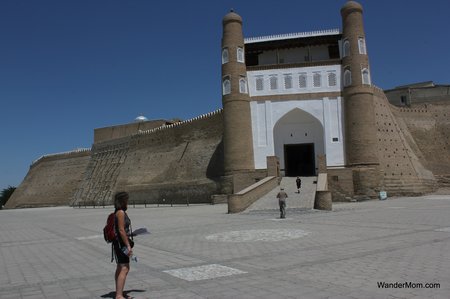 The next order of business to get our sightseeing day back on track was to find some, you know, sights. Specifically I wanted to visit the Ark and Murph wanted to see the Zindon (prison) where Stoddart and Connolly were held. We conceded defeat to the labyrinthine streets of Bukhara and hailed a passing taxi which dropped us off at the spacious if barren Registan in front of the Ark. (Side note: It’s probably just as well this square has been left empty. As a place where people were bought and sold, whipped and executed, the drama of the history on these flagstones is best left unadorned).

Inside the Ark we hired a local guide, R. He talked us around the building with a mini-lecture on Bukharan, Uzbek and Central Asian history in way more depth than we’d bargained for. Poor BigB and Cam tuned out and sat dejectedly on a wall, but R was interesting so we followed him into the little museum with promises of “soda and ice-cream when we’re done” to the boys. To say that I was distracted by my grumpy kids by the time we got to a room showing photos of Bukhara in the 18th and early 19th century is a definite understatement. So distracted that when R started prattling anti-Semitic conspiracy theory gibberish in front of a picture of Bukharan Jews I really thought I was hearing things.

(The following conversation is fudged to account for R’s mediocre English – on this particular subject.)
“The American presidents, Bush, Clinton, all”, waving his hand to indicate he really meant all, “they have Jewish blood, no?”
Murph, equally disconcerted, but in his best polite tourist mode, held up his hands, shrugged and said, “I’m not sure, I don’t know”.
I was too shocked to be so courteous.
“Murph, I think he’s saying that all forty-odd US presidents were Jewish”.
I got the patented Dont-Be-Daft-Duffy glare from my husband but R nodded enthusiastically and then added: “And Bill Gates, he’s very very rich, he’s Jewish”.
Our kids had picked up on the fact that “something interesting” was going on and started asking questions.
“What’s he saying? What about Bill Gates?”
How I love having to tell my kids that the guide we’re paying to teach us about a historical site in another country has just started spouting nonsensical rubbish. Even better to have to do so politely and respectfully because said guide is standing right in front of you! What a mess.

We continued on to the Zindon with R leading the way. The jail is a meager four rooms but with hefty chains and manacles on the walls. The famous bug pit is indeed fearsome. Our guide more than a little discredited in my eyes, we rushed through, said our goodbyes quickly and went in search of a cold soda.