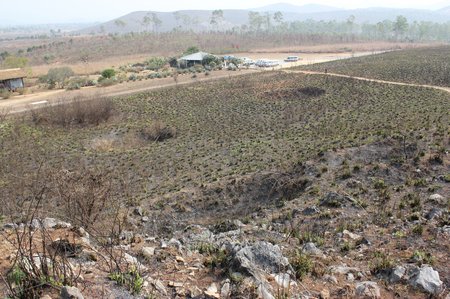 This is a personal blog. I talk about the odd charity but mostly I steer clear of troublesome topics such as politics or religion. Today, for once, I’m going to break that rule.

The Convention on Cluster Munitions is a powerful disarmament and humanitarian treaty. The U.S. should ratify this treaty.

In Laos, we visited the offices of the Mines Advisory Group, read about the work they do clearing unexploded ordinance (UXO) in Laos (and other countries) and watched the three movies they show on the impact of having UXO in the ground around rural villages and their work in removing it. We were all in tears.

Large bombs make better movie footage and the large bomb casings that we saw all around Phonsavan were visually arresting but, as a parent, the “bombies”, the small bomb-lets inside a cluster bomb scared me stupid. Cluster bombs are packed with these small sub-munitions each about the size of a baseball, some brightly colored, some not (Photo above courtesy of the Cluster Munition Coalition). Every kid I know would pick something like that up and examine it, maybe even toss it about a bit. These bombies are littered all over some parts of Laos, hidden under the fields. From a war that most of the world didn’t and still doesn’t know about which ended 30 years ago.

The Secret War in Laos should not have happened. That Laos is the most-bombed country in the world, per capita, is a tragedy, the effects of which are still being felt today. It scares me that Cluster munitions, which still maim and kill people in Laos are being used in other conflicts around the world today. It is stupid and should be stopped.

You can learn more about Cluster Bombs and the Convention at Stop Cluster Munitions.

Thanks for listening. Normal programming will resume tomorrow

4 thoughts on “Cluster Bombs Should Be Outlawed”