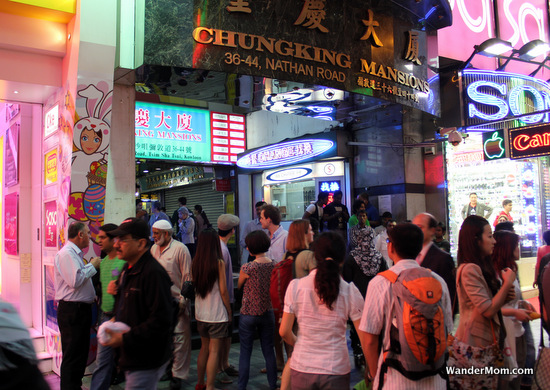 Ta-da: the Chungking Mansions, Kowloon, Hong Kong.
As far as I know, I haven’t stayed in any other place that is the subject of an Economist article, a wikipedia page, and a book.

We stayed at the Chungking Mansions because we were trying to stick to budget ($150 per day: accommodation + food + entertainment for four people). This, it turns out is a tricky thing to do in a popular destination such as a large city like Hong Kong.

I searched for decent budget accommodation in guidebooks, by asking friends and trawling the internet. Hostelling International had a couple of interesting-looking properties, but, sadly, those were booked out. Every other budget-friendly guesthouse or hotel I could find that wasn’t in Chungking Mansions was also either booked solid or had enough critical reviews on the interwebs that I was suspicious of the nice reviews.

Tom’s Guesthouse in the ChungKing Mansions seemed to be the best of a bad lot and at $15 per person per night the price was certainly right.

Full disclosure: I had no problem with staying in a building described by Lonely Planet as a “crumbling block”. We were only going to be there for three nights, how bad could it be? Murph (being Murph) was positively excited at the prospect. I was only slightly worried about exposing my kids to drug-dealing and prostitution. In my very scant experience such transactions aren’t carried out in broad daylight or in front of kids – and they’re both old enough to learn about the seamier side of life anyway, right?

We arrived late at night. The airport bus dropped us on Nathan Rd. When we found the building, it felt like we were walking into a sea of hawkers, people of all colors and tribes, calling out in a half-dozen languages. Utterly disoriented, it took us a shameful amount of time just to find the right elevator. As I was checking us in, CAM berated Murph:
“Well this is just perfect. You take us to what is one of the world’s best cities and where do you land us? In the armpit. Just lovely.”
He was serious. Murph and I both played perfect parent in the face of such a diatribe. If we’d had our own room I’m sure we’d have laughed together later but the rooms… 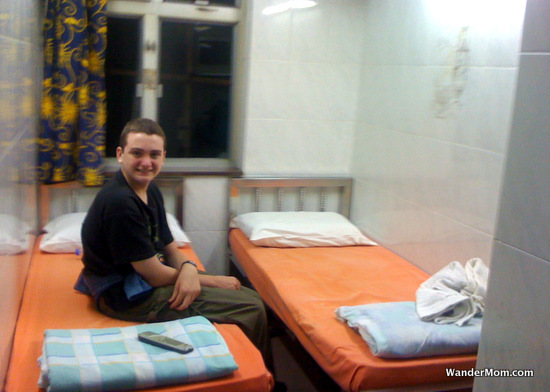 The rooms at Tom’s Guesthouse are tiny. We’d booked a double (for Murph and me to share) and a twin (for the boys to share). There was no way Murph and I could have fit in the “double” bed. I ended up sharing with BigB while Murph and CAM shared the twin room, which Murph quipped “wasn’t big enough for both of them to breathe out at the same time”.

The photo above was taken standing at the door of the room. Immediately to the right (not in the photo) is the door to the bathroom-cum-shower, a classic example of a tiny Asian bathroom where you shower standing in front of the sink and you need to close the toilet seat and move the toilet paper out of the way if you want avoid having a soggy mess to clean up when you’re done showering. It’s efficient but definitely made for short people.

You cannot beat the location of the Chungking Mansions building. At the bottom of Nathan Rd in Kowloon you’re right in the middle of prime shopping territory and two short blocks from the ferry terminal over to Hong Kong Island. If we’d had a view I’m sure it would have been awesome – but there was construction… 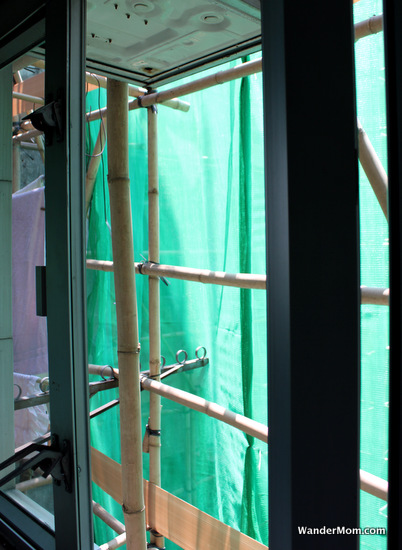 (Side note: do you see that scaffolding? That’s bamboo and bailing twine 16 floors above the ground. Maybe those safety warnings were not totally without merit…)

Tom’s Guesthouse is tiny but pristine. The staff we met were friendly, courteous and helpful. The little Filipina lady who staffed the front desk for most of the time we were there could not have been nicer. She asked us about our plans for the day in the morning and laughed at our stories when we came back in the evening. She apologized for construction noise and made sure our rooms were cleaned daily. She didn’t ever offer suggestions on what we should do or see in Hong Kong – which made us wonder whether she ever actually left the building. She, like many of the people living or working in the building, was a immigrant to Hong Kong. The Chungking Mansions was her world. It was not inconceivable to imagine that she had seen no more of Hong Kong than just this building in the eight-plus years that she’d lived here.

I know that most of my friends, especially those with kids would not, ever, in a million years, stay in this little guesthouse – which is actually a pity. The Chungking Mansions are an exercise in the adaptability of the human spirit. I’ll admit, the CK Mansions freaked me out a little the first day. I couldn’t imagine letting my boys go from our 16th floor room to the kiosk on the ground floor on their own. But by day three the front-door crew waved us in as if we were part of the furniture – the only thing we were missing was a complicated hand-slap-shake routine (hard to fake). We window-shopped on the warren that was the ground floor, letting our kids roam On Their Own. The CK Mansions multi-cultural, multi-ethnic melee became our new normal, and we were all fine for it.
I did not observe any tricks or drug deals going down.
Murph: “You can take the girl out of the convent…”
Be that as it may, if you’re looking for budget-friendly accommodation in Hong Kong, I’m happy to recommend Tom’s Guesthouse – so long as you don’t mind that the building where it’s located is a block-sized fire trap. OK?