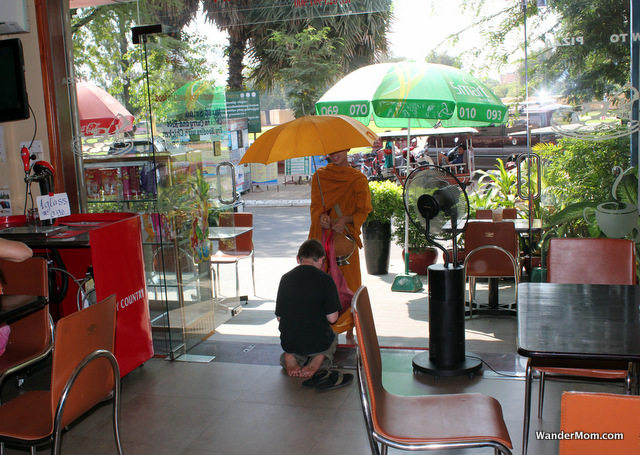 The day after we visited the Killing Fields memorial and Tuol Seng, this young monk called by our hostel as we were having breakfast. Unprompted, BigB jumped from his seat to give alms and say a prayer. I think it was his way of responding to what he’d seen the day before.

This post is part of a series called Itineraries. In this series I’ll document the itinerary which we used when visiting a country in summary. 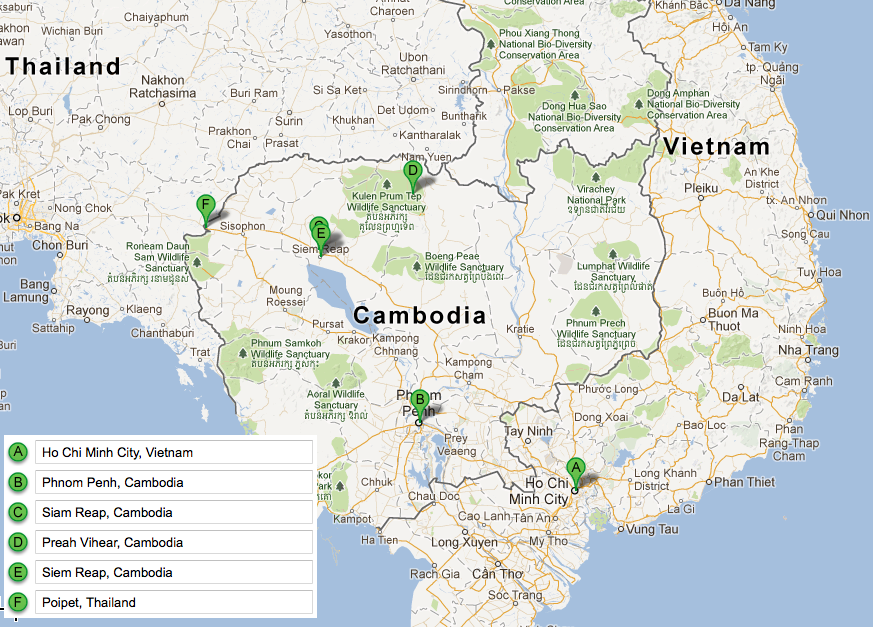 Day 1: Travel day from HCMC to Phnom Penh
It was easy to find a coach from Ho Chi Minh City to Phnom Penh since this is common, well-traveled path for locals and tourists. You see bus companies advertising services all over central HCMC and in hostels/hotels. We picked a reasonable-looking operator and bought tickets the day before for a mid-morning departure. The bus ride is an easy six hours. We paid ~$15 each for seats on an air-conditioned coach (and the AC worked!). The border crossing was painless: get off the bus, line up, show your passport, get back on the bus, carry on. 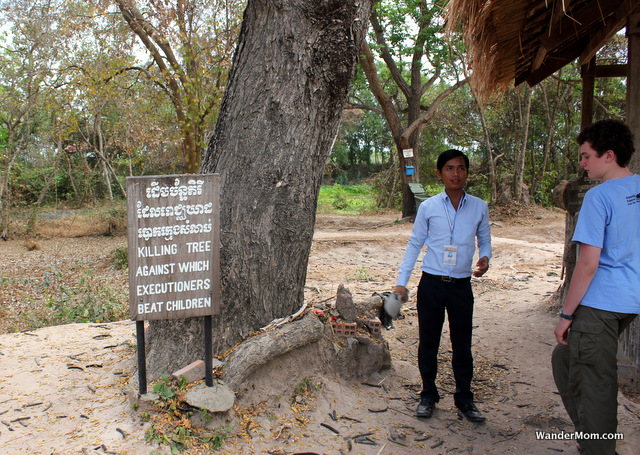 Day 2: Phnom Penh: Killing fields, Tuol Seng
Even when you travel for an extended period (a year for us) and you think you’re jaded and every temple and castle starts to look the same, you can still have unforgettable days. This was one of those. We visited the Killing Fields memorial and the Tuol Seng prison. We took a private tour at the Killing Fields. Half way through we stood at a tree and our guide explained that infants were killed here by having their heads bashed against the sturdy trunk to save bullets. The ground felt like it was going to give way from under me. My stomach lurched. BigB clutched on to me – many months later he confessed that at that moment he just stopped listening, his 10-year-old mind couldn’t process the horror. 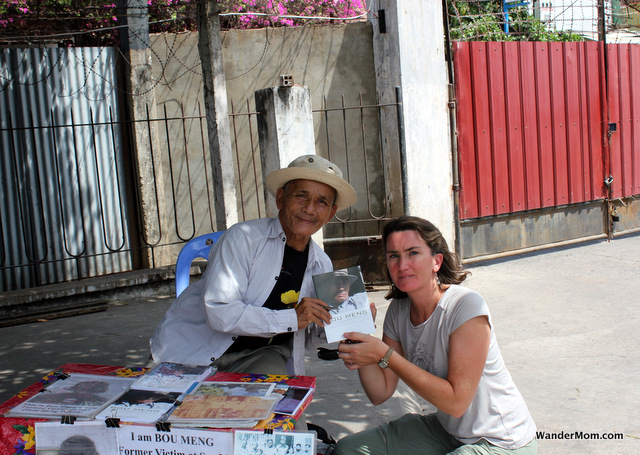 We went back into Phnom Penh proper to visit Tuol Seng, the school that the Khmer Rouge converted into a prison. I thought of my friend Pam who’d told me that she sobbed on the street outside this place. Maybe it was because I was still wrapping my head around the sights of the Killing Fields but I walked through Tuol Seng in a bit of a daze. CAM and BigB checked out completely. And then outside we met Bou Meng, one of the only survivors of this prison. He told us his story, we bought his book. He was positively cheerful talking to us. Then my tears came. I felt ashamed. I remember watching The Killing Fields and reading about the Khmer Rouge. I couldn’t plead ignorance of what had happened here but I, like most of the rest of the world, moved on and stopped paying attention – even though the Khmer Rouge was still in existence until 1999!

Day 3: Travel day from Phnom Penh to Siam Reap
Let’s just say that a day of doing nothing more challenging than looking out a bus window was very welcome after what we’d seen on the previous day.

Day 4-7: Siam Reap, Angor Wat
In Siam Reap we stayed at the budget luxury Central Boutique Angkor through which we booked an Angkor Wat tour – starting at sunrise. After the obligatory photo moment we spent hours walking through temples, learning about different kinds of temples, different Khmer eras and generally scrambling about the vast complex. The size was a bonus for keeping our boys engaged but they were templed-out at least an hour before we were. Like many other huge tourist sites worldwide this is one where I think budgeting for a multi-day visit (in money and time) is a worthwhile investment.

Over the next two days we lazed by the pool, caught up on schoolwork (for the kids) and explored Siam Reap. Murph and CAM did a half-day Khmer cooking school at one of the restaurants in Siam Reap’s central tourist area. Murph and I also got to go to one of the more unusual classical music concerts we’ve ever attended: a cello concert given by Dr. Beat Richner (Dr. Beatocello) at the Kantha Bopha hospital in Siam Reap. As well as some great music we learned about his work in Cambodia and the dire state of public health in this impoverished country.

Day 8: Blood donation in Siam Reap, travel to North Cambodia
Dr. Beatocello impressed us so much that the next morning we returned to the hospital to donate blood – ironic really since as people who lived in Ireland in the 1980s we can’t donate blood at home in the U.S.
In the afternoon we were picked up by some people from American Assistance for Cambodia a charity that funds the building and operation of schools in Cambodia for a long, bumpy ride north towards the Thai border.

Day 10: Travel day from Siam Reap to Bangkok
Siam Reap to Poipet, on the western Thai border is a pretty straight run on pretty well-maintained roads. The border crossing was also straightforward. We hadn’t booked onward transport but were savvy enough to know to walk away from the touts hanging around at the exit checkpoint. A little further in we stopped at a cafe and took our time before selecting a minibus in which to travel onward. Even with that we ended up on a overcrowded bus – the extra passengers added after we had paid and were on board. This is something which, it seems, is almost impossible to avoid when traveling independently in Thailand.