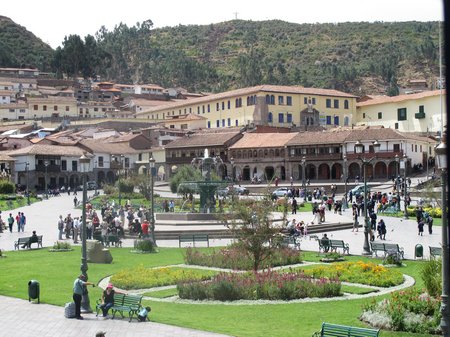 Cusco is a destination for travelers of all types, ages and nationalities and deservedly so. As the “navel of the world”, the capital of the Incan Empire which stretched from Ecuador to Chile it is a beautiful city.

Although the Incans were decimated by the Spaniards in the 1500s, Pizarro and his companions fortunately chronicled much of what they saw and did so what remains today is a fascinating mix of the city that was and the city it became under the Spaniards encircled by today’s modern city of Cusco.

I visited Cusco for the first time in 1998 with a toddler, fueled by a life-long dream to visit Machu Picchu and escorted by a Peruvian friend. I remember CAM gleefully chasing pigeons on Plaza de Armas and toting him along in a backpack as we explored the Sacred Valley. But, thanks to the mysteries of altitude and toddler intestines, I did not get to see Machu Picchu on that trip.

Earlier this year, when my husband and I were planning our family world travels, returning to Machu Picchu and actually visiting this historic site was top of my to-do list. With older children (now 10 and 14) who’ve hiked regularly in the Pacific Northwest, it seemed only natural to take things up a notch and skip the comfy train ride from Cusco to Machu Picchu which CAM and I took the last time and instead, to hike the famous four-day Inca Trail with my boys. To do so, we had to spend four days acclimatizing in Cusco before starting the hike. 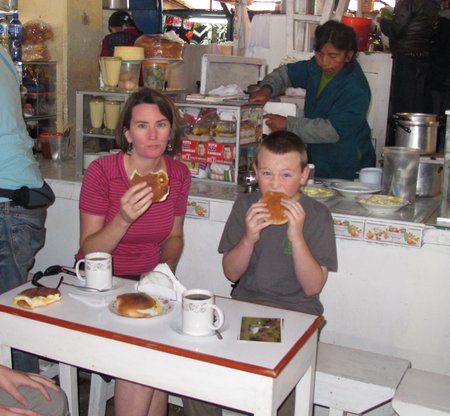 Cusco is an expensive city to hang out in for four days. Even apart from the many, many ticket-sellers on and around Plaza de Armas, the accommodation and food costs were higher than we experienced outside Lima. During our stay in Cusco, we actively searched out bargains including:
– We stopped by the Mercado San Perdo (the central market) for breakfast. An egg sandwich with coffee costs less than $1 – compared to over $5 for breakfast at any of the cafes on the main plaza.
– We bought empanadas or fresh bread rolls, fruit and water at the Mercado for picnic lunches. This did mean that on one occasion we were sitting on a park bench eating this traditional food while the person opposite us was eating her lunch from a nearby McDonalds.
– Instead of paying for a tour, we walked to visit Sacsayhuaman, the Incan fortress above the city. It was a short (45-minute) but very steep hike but the views of the city from those heights were absolutely worth the effort.
– In walking around the city, we became familiar with the streets and plazas outside the center, even exploring the sprawling market at El Molino on the edge of the city. For our efforts, we were treated to a variety of colorful parades and markets which I’m sure many other visitors missed.