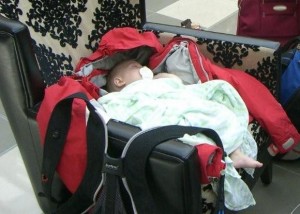 Flying with infants and toddlers can be a disaster or, if your child falls asleep and take-off and doesn’t wake up until landing, it can be great. The best you can do is make sure you’re prepared for all scenarios and then stay calm regardless what happens.

When traveling with very young children, being prepared means thinking about seating, safety, feeding and diapering. For me, keeping my child entertained on flights meant packing lots of books to read. You know best what will work for your child.

Bulkheads are the partitions (either a wall or curtain) that separate sections of the aircraft, such as first class and coach. Some people prefer bulkhead rows because they have extra legroom. Also, with no row of seats in front, no one can recline his seat into your space. All carry-on bags must be placed in the overhead bin during takeoff and landing, and despite the extra legroom, children aren’t permitted to sit, lie down, or play anywhere except in their seats.

Reserving a bulkhead seat is notoriously difficult. These are limited (on a British Airlines flight to the U.K., they numbered only fourteen of the 227 coach-class seats) and are usually as-signed not only to families, but also to people with disabilities and priority customers.

With an infant under one year and a flight longer than four hours, it may be worth calling the airline to plead your case. For these endurance hauls, you can request a bassinet that attaches to the bulkhead wall, allowing your baby to more easily nap. If you cannot secure a bulkhead in advance, check in at the airport early (at least two hours) and request your seating preference then. For kids over five months, you have a choice: request the car seat rather than the crib type of bassinet. The latter is often far too small for babies over five months old.

Most airlines allow a kid under two to fly as a lap child. This means that you will not pay for another seat, although you may be required to cover taxes and fees such as fuel surcharges, since the child is still a passenger. While this is a very attractive option, consider purchasing a seat anyway for kids more than six months old. Due to rising fuel costs, airlines try to fill flights as much as possible. This means you will likely be seated next to or between other passengers. The amount of space in which to care for your baby and store your bulging diaper bag will be limited. However, if you’re traveling with another adult and just one infant, and your flight is short, the lap-child option may be an worth considering.

Only car seats approved by the FAA may be used on board a flight. Check the bottom for the safety label that verifies your car seat is approved. Every airline has different rules regarding rear-facing infant seats. Check with your carrier’s policy in advance to avoid having to banish gear to the hold.

You might consider carrying a special seat belt for your child. In 2006, the FAA approved such a device for kids who weigh between twenty-two and forty-four pounds, to be used in addition to the plane’s seat belt. Parents will appreciate that this device is far smaller and lighter than a car seat, and is much easier to lug around. The AmSafe Child Aviation Restraint System (CARES) employs a belt and shoulder harness that goes around the seat back and attaches to the passenger seat belt, providing restraint for the upper part of your childís body. In addition to being certified for U.S.-based airlines, it is also approved for those in the U.K., Australia, New Zealand, Singapore, and Canada. The CARES device can be ordered on KidsFlySafe.

Most airlines require that you gate-check large strollers. Though this is a convenient service, such items can be easily damaged. I purchased a small, lightweight, umbrella stroller for traveling and found it to be a worthwhile investment.

Child carriers, such as the Ergo baby model, are a great alternative to strollers when traveling with infants and toddlers. They’re light and easy to pack into an overhead bin.

Flying with Infants: What to Pack For The Flight

Carry enough diapers for the entire flight and layover, plus twenty-five percent extra for any delays or lost bags.

The Transportation Security Administration rules prohibit you from carrying liquids through security, although you can purchase drinks once you’re through the screening process, and then take them on board. Rules change often, so check the TSA website before flying.

It may be possible to bring small amounts of baby formula, breast milk, and juice for your infant, as long as you declare it at security. Again, check the TSA website for latest information before flying.

Bring enough formula for the entire flight and layover. Then add twenty to forty percent more, in case of hassles.