Our bus from Loja was hideous. The bus itself was a classic, older, drafty, noisy, not exactly clean coach with grubby fringed upholstery.

The boys crashed out pretty quickly but the jaunty music which the driver may have been playing to keep himself awake or maybe because he likes to sing while driving meant that I had little hope of falling asleep. Poor Murph was too cramped to sleep which was just as well since he had to get out at the Peruvian regional check-point at 4:30am and again at the border an hour later. While waiting in line on one of these stops, a fellow passenger struck up a lively “conversation” – in the way that a conversation is lively when language is a barrier but one of the parties is talkative and is happy to ramble on with only nods and smiles from the other party. We arrived in Piura, on the Peruvian border with Ecuador, at 6am and as we disembarked at a nondescript office on the edge of the city, this same passenger came rushing over and in part-spanish, part-gesticulation instructed that we wait where we were until he got back.

Fifteen minutes later we were squished into the back of his car careening around the empty morning streets of Piura. I know that some of you reading this are probably thinking that we were crazy, but honestly, he was a nice guy and seemed to be doing his best to show us Peruvian hospitality – just in a slightly unusual way. He pulled in the car in front of another strip-mall bus company office, although this one was clean and brightly lit. Such was our introduction to Cruz Del Sur, a Peruvian bus company which we used for almost all of our travel in Peru. 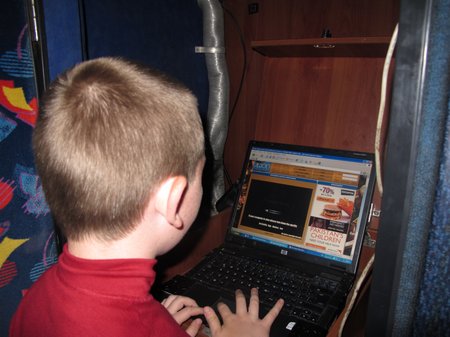 Our boys loved the Cruz Del Sur buses and deservedly. The fleet is new, clean and well-maintained. The on-board toilets were always clean (a big plus on 15-hour bus rides) and on overnight trips, passengers get a blanket and pillow. Some buses have wifi and some have a public computer with internet access – which, as you can see above, BigB used for playing games on one of our longer journeys. There’s a steward, a food and beverage service and movies – in English with Spanish subtitles or vice versa. Both boys found the similarity to long-distance flights fascinating but both said they thought the bus was even better because you could get up and walk around.

You can book Cruz Del Sur tickets online, although we were able to book at the hostels where we stayed in Lima and Arequipa. The available routes run up and down coastal Peru and up to Cusco and Puno. The standard, Cruzero seats run about $40 for a six-hour bus trip with the bigger, more comfortable and more expensive (although not by much) Cruzero Suite option available on some buses.

It’s hard not to watch the movies on long bus-rides especially when the volume is high. Murph and I were fascinated by the fact that even though we were obviously the only English speakers on a number of buses, the sound was still very loud although most of the rest of the passengers were likely reading the Spanish subtitles. In the early morning Cruz Del Sur seems to play kid-friendly movies (our kids watched Nanny Mc Phee II in Spanish and still laughed along). That said, we’ve seen some pretty odd movies during the 1,500 miles we’ve traveled by bus in Peru (ever heard of Fireproof, anyone?). So much so that after failing to avoid watching that particular gem Murph quipped that there should be a new “straight to Peruvian bus” movie rating category for clunkers best avoided.