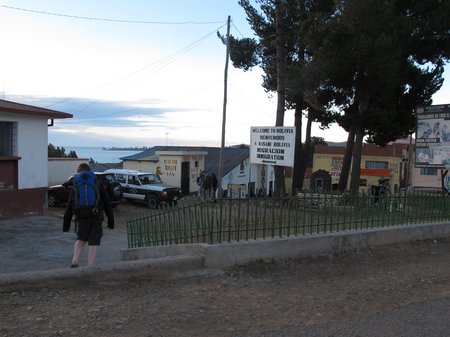 It’s never a good idea to show up at a border post without having first checked whether you need a visa to enter the country and how much the visa will cost.

I guess by that measure when we showed up at the Bolivian border post on the edge of Lake Titicaca we were half-ready: we’d totally forgotten to check the visa cost. Sometimes I say that my life is plagued by Murphy’s Law (my husband’s last name being Murphy) and sure enough, we didn’t have enough US$ with us to pay for four visas into Bolivia.

In early 2010 the US started charging Bolivians $135 to enter the US. The Bolivians, in a grand tit-for-tat political gesture started levying the same fee on Americans wishing to enter Bolivia. Not wanting to fork over $540 – since we have the option of returning to Bolivia with Irish passports and then paying nothing to enter – we turned heel and returned to Yunguyo, the nearest Peruvian town. I’m 100% sure that we’re the only traveling family who has ever stayed in this little pueblo. I’m guessing this because the night we stayed happened to be the town’s annual festival so the entire population was gathered in the square and on the streets and as we walked around every last resident stared us up and down as if we’d dropped from Mars. 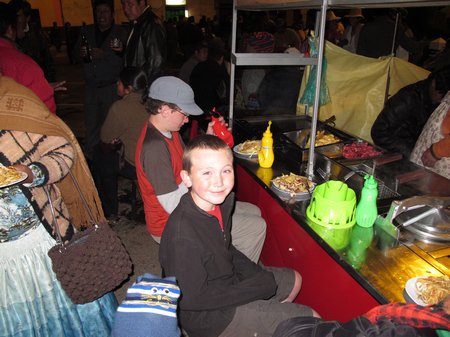 There were food stalls all around the main square so that’s where we had dinner. At one point, when Murph and I were walking away from a stall with hot skewers of meat and potatoes in hand, the stall-owner nearly fell over in shock. She hastily pushed little plastic bags into our faces and it took me a minute to figure out that she didn’t want us leaving with her metal skewers so if we wanted to take our food to go so to speak, we needed to first take it off said skewers. Duh!

BigB had his first experience of being patted on the head by multiple fawning grandmothers and I was taken aback when a young woman approached me with her toddler in arms – I’m still not sure whether she was showing me to the child or showing the child to me. That said, the chubby little bundle was too cute to ignore and I guess I performed as expected, cooing and stroking the kid’s cheeks so when we walked on both of of us, me and the proud mom, were happy.

The next day we took the bus back to Puno (which the boys had taken to calling Pooh-no because of the stench of refuse near the bus station). In the evening we started what I rate as the absolute worst bus journey of our trip so far: a 10-hour overnight bus to Arica. When every local on the bus is bundled up in layers of blankets and you’re in nothing but a sweatshirt you know you’re going to be cold. The bus crossed over the Andes back down towards the coastal desert and I shivered and bounced around in my seat – there being absolutely no protection from the bone-rattling suspension. The kids, unbelievably, slept like babies.

3 thoughts on “On The Bolivian Border With Peru”