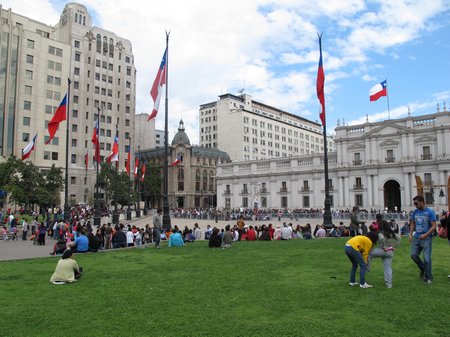 “Does Chile have a space program?” I asked my husband as we rounded the corner into the park-like area behind La Moneda, the presidential palace in central Santiago. He fixed me with one of his “Are you really that stupid, woman?” stares.

“I’m only asking because that looks like a rocket” I said, pointing to the red, white and blue structure on display outside the palace.
“Oh my, it’s the Fenix!” he replied, quickly taking in the crowds of people, the soldiers and the barriers around the building.
“That’s why there are so many people here. They’ve come to see it.”
Off he went to investigate further. The boys and I settled on the grass to wait for him.

We’d arrived in Chile a week beforehand on the same day that the 33 miners were being released from the Copiapó mine. In our hostel the TV was on all day, staff and guests transfixed watching the coverage of the release. One after another, we’d seen the miners emerge from the impossibly-narrow capsule which had ferried them from their underground prison. And now here it was, right in front of us. There were hundreds of people gathered in the plaza. Young people, old people, people in ones and twos and large family groups. There were many, many families with young children. The festival atmosphere was electric with national pride and simple joy. Memories of this important moment in Chilean history were being forged as we watched. 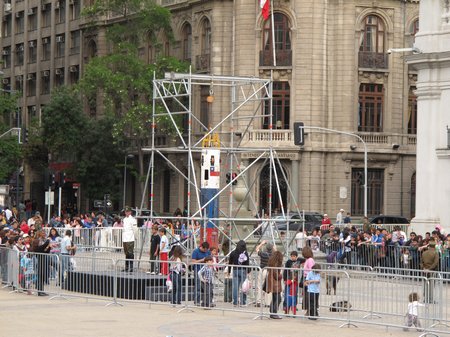 “Guys, this is a fantastic thing. It’s a true celebration of a great moment for Chile”, I said to my not-so-interested children. CAM was lying on the grass beside me in classic disaffected teenager mode and BigB was more interested in the two kids beside him who were playing paper-scissors-rock (in Spanish) than anything else.

“Seriously, you two, I need you to listen for a minute, you need to know why the Fenix on display here is important both because of the miners and because of Chile’s history”.
They didn’t know it, but I’d led us towards La Moneda on our walk through central Santiago so that we could stop and maybe, hopefully talk for a moment about modern Chilean history – specifically, the Pinochet years. I’d chosen La Moneda since the palace had been shelled in the opening days of the coup and, according to our guide-book, its re-opening after Pinochet was a symbol of hope for Chile.
I had two bored faces looking at me. I pressed on with my mini-history lesson explaining who General Pinochet was and how many Chileans had been imprisoned or disappeared during Pinochet’s rule. I could see that the idea of people “just disappearing” had caught their attention.
“This, right here, is where people gathered and celebrated after Pinochet”, I explained, “but that was after a very sad time for Chile. Today, well this is a celebration of a great engineering achievement that has nothing to do with war or dictators. We’re lucky to be here.”
“But how did they get back to democracy?” BigB’s question interrupted my little lecture.
Aha! They were listening!

I had to consult my guide-book again before I could answer. I could barely hide my smile, though, this was just awesome. This was why we were traveling: so that our kids could learn about the world by being in the world.