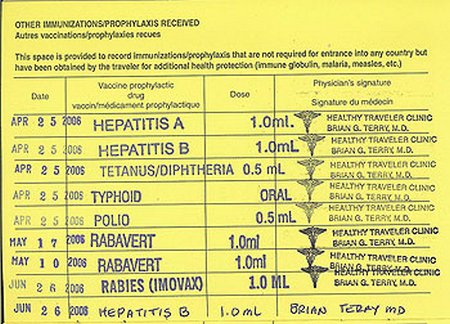 Disclosure: I’m writing this post before meeting with the travel doctors or telling our children that they’ll be getting multiple shots over the next few months in preparation for our family world trip. I expect the doctor to be competent and professional. I expect my children to absolutely lose it when they realize what’s going on – you’ll probably hear their screeches wherever you are.

I’m writing this because firstly our appointment at the UW Travel Clinic is today and secondly because the conversation I had when making this appointment was like a game of poker, a little weird and strange enough that it begs sharing. The receptionist responded to my request for an appointment – my opening gambit if you will – with a laconic sigh. I countered by saying that we’re a family of four and raised a little by saying that we plan to travel for at least ten months. She met the parlay and raised again with a sly “can you list the countries you plan to visit”. I rattled off a list including most of South America, South-East Asia, Southern Africa and the Middle East (just for good measure). The conversation stalled in silence momentarily. My bluff called, she informed me that we’d have to meet with the Director of the clinic – and then added that we were just in time to start our series of Hepatitis A shots. I think she won that hand. We’ll see how things go today when we meet in person.

And naturally, I’ll be sharing full details of all the shots we’ll be getting and why in a subsequent post.