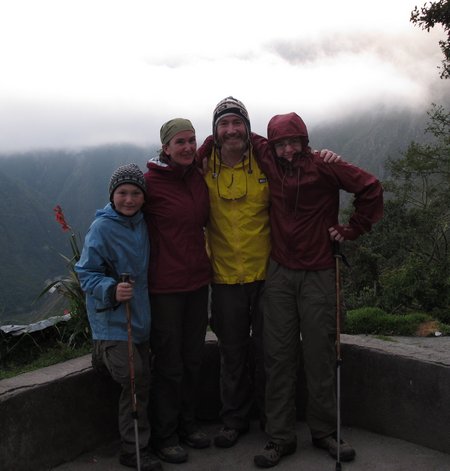 In 2000, the Peruvian government started limiting the number of people who can hike the Inca Trail. Each day only 500 people, including porters and guides, can start this trek.

This is a lot of people but groups are spaced out along the trail and you really only feel the numbers at the campsites. Worst of all is the Wiñay Wayna campsite, the final stop on the trail and the place where all hiking groups stay on the night before reaching Machu Picchu. And the very worst point for me was 4am the morning of the fourth day of our Inca Trail hike when our group together with every other group collected at the “restaurant” at Wiñay Wayna and waited to begin the final day’s hike. It was a zoo with the nastiest bathrooms you can possibly imagine.

At our guide Alex’s suggestion, we waited until all the other groups had left before starting out. This meant that we weren’t bunched between other hikers rushing to get to Intipunku for sunrise. We had the trail to ourselves and took our time enjoying the valley and mountain views and the beautiful morning sunshine. Our boys practically skipped along the trail. It was an easy two-hour hike along a mostly flat path. I know taking your kids for a walk in the woods at 6am may not seem like most people’s idea of fun, but I know I’ll cherish that particular memory in my heart. They were silly. They were joking. They were thrilled to be almost done with the four-day trek and I was immensely proud of them.

We were all surprised by the crowd at Intipunku, but that quickly passed in a cheerful round of hellos and high-fives from the other hikers. This “end of trail” bonhomie between and across groups who start the trail on the same day probably happens here daily. It seems like an informal ritual and it felt great. We took some photos and continued down into Machu Picchu.

At this point, I’d love to say that our guided tour of Machu Picchu was a moving, spiritual experience and that my children were engaged and interested but I’d be lying. Machu Picchu is incredible. It’s awe-inspiring from the location to its size to the engineering skill which went into the construction. But my kids had been up at 4am and had hiked for two hours and now it was hot and we were only some of the many hundreds of people visiting on that day. Within an hour or so, they were done. Alex worked really hard to keep their attention and engage them with specific questions – he even managed to weave in a little “Twenty Questions” – a reference to the game we’d played frequently during the previous days – having us guess the function of architectural features on some buildings. I can’t thank him enough for his patience.

We left Machu Picchu after just four hours. On the bus to Aguas Calientes, Brendan was asleep in minutes and Cillian, although not quite out cold, was nodding with a droopy head too. It had been a busy, energetic and educational four days.

Before the trek, both of our children were apprehensive about the adventure, but Brendan particularly so. We’d repeatedly assured him that, yes, it would be hard work, but that he was strong and fit and that when the hike was over, he’d be proud of his achievement. He didn’t accept these claims until out of the blue, a couple of days later, he casually said “You were right Mom, I am proud of myself”.