Today’s guest post is from Sarah Franklin, the editor of How To Fit A Car Seat On A Camel – a hilarious collection of stories about traveling with kids. I love Sarah’s writing and subscribe to her blog nevergoeswithoutsaying. In fact, I might say her post on the real Irish Anthem is possibly my favorite blog post of all time. You should check it out. 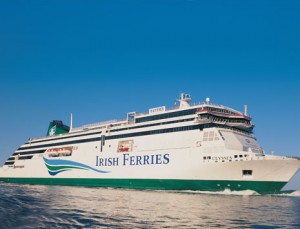 It happened the way these things always happen: hubris. No sooner had I sat back in my seat, smugly contemplating the journey ahead of us, and said, “Well, this is going pretty well!” than we stuttered to a standstill. Great.

We were on the second leg of a 7 ½ hour drive-and-ferryboat trip from our home in Ireland to visit family in England when I was stupid enough to voice my delight. The first leg, 90 somewhat choppy minutes on a cross-channel ferry, had been terrific for our kids if less so for us adults. Apparently sea legs are only given out to the under-fours these days. Our particular under-fours were very keen to test out said sea legs by belting up and down the length of the boat, howling with laughter as they tilted sideways with the motion of the ferry. Dave and I took it in turns to stumble along after them, retreating occasionally to let the pretty shade of green recede.

All in all, we were more than relieved to see land again. We loaded the boys into their car seats, surrounded them with the requisite snacks and water bottle, hit “play” on the portable DVD player, and we were off.

The portion drive from North Wales takes you, seemingly unendingly, through North Wales. It’s like that kids’ picture book: “We can’t go under it, we can’t go over it; we’ll have to go through it”. Imagine that for an entire country and you’re set. Fortunately, Wales has the benefit of being incredibly beautiful– steep white cliffs dotted with cute white sheep plunge effortlessly into the churning sea below

After 90 minutes of highway, you hit the freeway, and industrialized Northern England. From here, our plan was to connect with the major freeway running south down the country, then on west. The children were napping, the weather was drizzly, but fine; the roads were busy, but not traumatically so; what on earth could happen?

And….halt. As the Bacardi ad used to say: “total gridlock”. When we learned the reason for our complete lack of movement, it sounded like the punchline to a joke. A truck had overturned on the freeway one junction ahead of us and spilled its full load – of powdered glue. And now the drizzle had turned into a steady pour of rain, all the better to turn the powdered glue into real glue. We weren’t going anywhere. For another four and a half hours.

Four and a half hours stuck on a freeway with two (now awake) under-fours – not the great start to a holiday. Fortunately, if not a little oddly, the boys just assumed this was all part of the trip – kids have a remarkable way of normalizing all sorts of things. Lucas, aged two and a total screen addict, soon realized that nobody was switching off the DVD player. Stunned by the prospect of watching an entire year’s worth of Postman Pat in one sitting, Lucas evidently decided now was not the time for a case of the Terrible Twos, and sat transfixed in front of the screen whilst we watched the traffic not moving and wondered anxiously just how long this could continue. Jonah, aged four, tired of mailbox antics sooner than his brother, but was entranced by all the “forbidden” things he was suddenly allowed to do in the car. “I can get out of my seat? You’ll come here and read me a story? I can have more chocolate?” He stopped short of testing the waters and asking for the puppy that’s been on his wish list for a year or more, but he was clearly tempted. “What is this parallel universe where the answer to everything is yes?” you could see him wondering.

Eventually we inched our way to the next junction, at which point the travel gods smiled on us again. Although we were still a good 300 miles from our destination, we happened to be a mere ½ mile from my childhood best friend, who was more than happy to welcome our road-weary boys, feed them (and us) and let the kids run riot for a bit. Then we bathed the boys, popped them into pyjamas, and told them it was time for bed and an adventure – when they woke up they’d be at Grandma and Granddad’s house. Again, you’ve got to be thankful for kids with big imaginations. Tele-porting sounded utterly plausible to them (and was sounding more than desirable to us at this point).

It wasn’t so much tele-porting as a canny local detour and a long night drive, but when the kids woke up the next morning, they were, as promised, ensconced chez their grandparents. “This is a great holiday!” said Jonah. And despite the sticky beginning, it was.