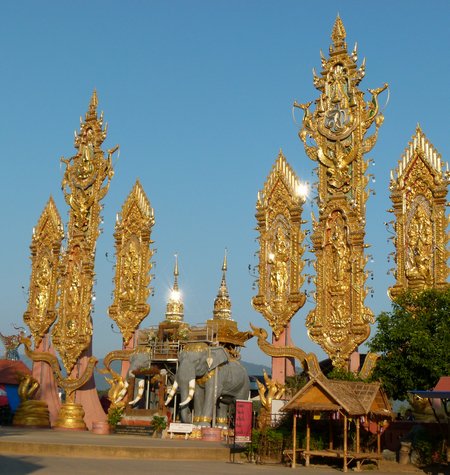 We arrived at Golden Triangle, Thailand late in the afternoon. It had taken almost the whole day on a minibus and then a public bus to get from Chiang Mai to Chiang Rai to Chiang Saen and then on to Sop Ruak, a hamlet outside of Chiang Saen. At this stage even I was begining to wonder whether it had been worth the effort to get ourselves to this point on the map, where the borders of Thailand, Laos and Burma meet. Distracted by the glinting edificies and elephants, we snapped some photos and trudged along looking for our hotel, which turned out to be about 2km outside of the village. When they didn’t have any record of our reservation things careened on a downhill trend pretty quickly – until we realized that not having a reservation didn’t equate to there not being any rooms available and the bunglow that was being offered had two bedrooms and was cheaper than the rate we’d found online anyway. Done deal. We stretched out in comfort, pretty sure that we were the only guests at the Greater Mekong Lodge that night. 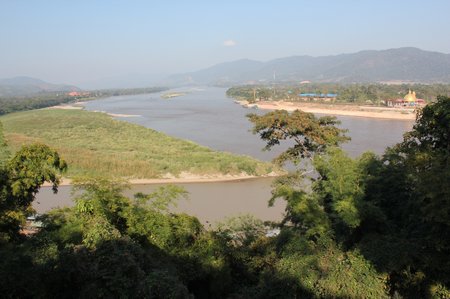 This is Reason Number One for being in an empty hotel in a remote corner of Northern Thailand: the view. The trees at the front of this photo are in Thailand. The triangular shape jutting into the river on the left of the photo is Burma and the land with the golden-roofed building on the upper right of the picture is Laos. I admit, it’s a little extreme to go so far off the well-worn tourist path to take a photo but geeky that we are, there was general agreement among the Murphy/Duffy family that this is a pretty cool snap to have in our trip collection. 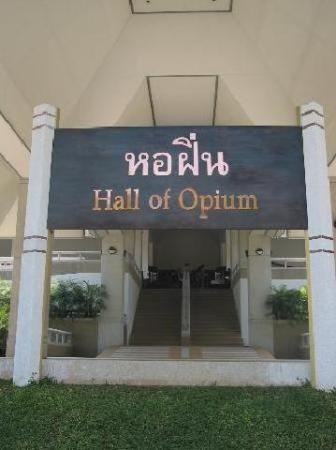 The Hall Of Opium museum was Reason Number Two (and actually, the primary reason) we were here. I’d read a short write-up about this museum in our guidebook and decided that it warranted a visit. I think I thought it would be fun and interesting but I didn’t expect us to spend four hours at the museum – without a single prompt or re-direct from parent to child – and I certainly didn’t expect the hours of discussion about drugs use which followed. In terms of a travel-educational experience, I think we hit the jackpot on this one.

Unfortunately, the museum does not allow photographs to be taken of the exhibits so I’ll try to describe briefly what we saw and the impact it had, particularly on our boys. (This write up of the drug trade in Asia is a narrative version of most of the material covered in the museum).

As the museum’s website says, the target audience of the Hall of Opium is teens and young adults, those most susceptible to the lure of illegal drugs, to show them how opium addiction became a world-wide problem, and how drug abuse affects individuals, their families, neighborhoods, and even their country. The edutainment factor is high, with plenty of multimedia displays and buttons to push for recorded explanations. All the information was available in Thai and English with some Chinese in the section on the Opium Wars.

There is a small display showing all types of the poppy (Papaver) plant and another showing how opium is made from the sap of just one type of poppy, Papaver Somniferum, outside the museum’s introductory movie. At this stage my boys were about as interested as they would be if I were telling them about how I choose and grow different plants in our garden in Seattle – as in bored to death. Joking about the airline-like “here are the emergency exits” sections in the movie helped lighten the mood.

I tried to encourage interest as we moved from the floor-to-ceiling multimedia displays telling about poppy usage from ancient times through the middle ages to it’s widespread usage in the late 18th century to the next room, a mock-up of a London wharf and the hull of a clipper. I wasn’t having much success. Then, as the history lesson unfolded, when the story of England’s obsession with tea and trade between Great Britain and her colonies extended to include the Boston Tea Party and the American Revolution, both my boys were riveted. We had to go back a room to examine the illustrations showing trade triangles and the trade deficit with China.

You’ll be bored if I list everything we saw through the rest of the 5,600 sq meters of exhibition space in this excellent museum. Briefly, we learned about opium manufacturing industry in India, the Opium Wars, the effects of opium addiction on China in terms of population, industry and society. There were mock-ups of opium dens and display cases showing opium-smoking paraphernalia including some beautiful pipes and headrests. At this point Murph was interested mostly in parent-play-along mode. It was when we entered the sections on opium growing in the Golden Triangle and the options which are available to governments to manage and prevent widespread drug use where the museum came into it’s own for him. Information about drug law enforcement and crop eradication was presented beside options to manage drugs through legalization – with equal weight given to all methods.

I wish that the Mae Fah Luang Foundation, who runs the Hall of Opium had a traveling version of this museum which they could exhibit to middle-schoolers and high-schoolers all over the world.