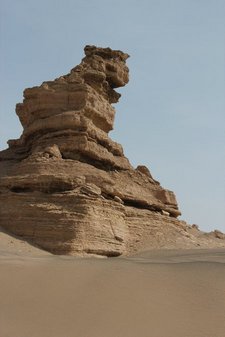 This is a Yardang. A what? I hear you ask? A Yardang is a desert rock formation carved from thousands of years of sand and wind erosion. They look freaky. This one is about three stories tall. I’m so glad I could share that with you, now you won’t have to take a hot, dusty trek out to your favorite desert to see one for yourself.

We signed up for a day-long “desert highlights” tour in Dunhuang: Yardangs, the Jade Gate pass, the Han Dynasty Great Wall (aka “the handynasty” to my kids from a sign we saw advertising it as such) and the old fortress of HeCang. The Yardangs are in a national park area 180kms northwest of Dunhuang. In the original days of the Silk Road people would have traveled many days by camel just to get to this point. Our drive took two hot, sticky and uncomfortable hours. Were I to make the choice again, I think I’d skip the Yardangs and just go to Jade Gate – a mere 1-hour drive into the desert. 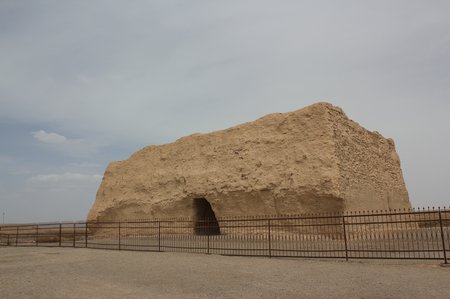 If you were traveling westward by camel train into or out of China between the 6th and 13th century you’d have likely had to stop at this gate and pay a toll. BigB and CAM were slightly impressed by this, understandably, since it it’s not much to look at. We walked around to see if there was more information on what the original site would have looked like. We didn’t find that information but we did find this map: 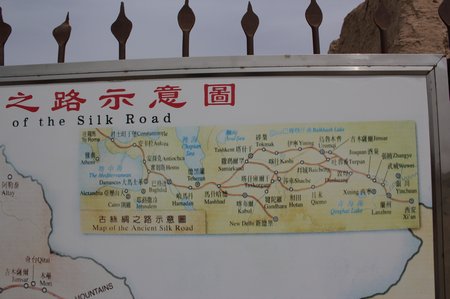 which snapped my boys out of their lackluster mood. “Hey, we were there”, said CAM, pointing to Lanzhou. “And there, and there”, pointing out the stops we’d made so far in China along this ancient road. We’d talked a lot about the Silk Road before and during this trip but I think this was their “A-ha” moment. They got a kick out of tracing the route we’d traveled and seeing our planned upcoming destinations in Central Asia in the context of the overall Silk Road picture. 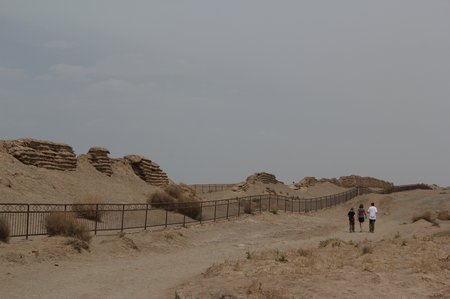 This segment of the Han Dynasty Great Wall was our last stop of the day. Broken and only partially visible in the sand it was still a two-thousand-year-old structure standing guard in the desert. BigB wanted to know if “China’s only real tourist attraction is the Great Wall – because it seems that there’s bits of it all over the country”. I explained that this part was likely built in the 1st century BC. Just for the sake of conversation, I asked my boys:
“What else was happening in the world while the Han Chinese were busy building walls to keep out invaders?”
The resulting conversation was one of those dream parenting moments. My kids rattled off what they knew about the before-during-after period in Roman History (thanks to The History of Rome podcast), citing battles and emperors and we had a good old chat about how trade and ideas moved from Europe to China and back even so long ago.

Our tour was arranged by John’s Information Cafe in Dunhuang.

One thought on “Western China Yardangs and Handynasty Great Wall”