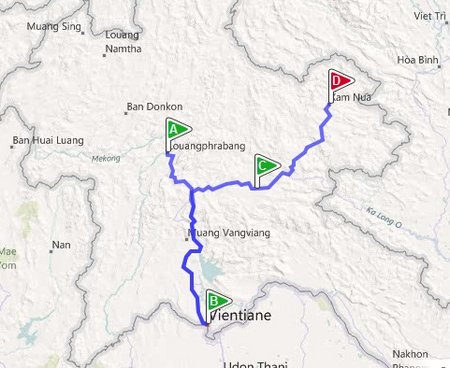 Luang Prabang, Vientiane and Vang Vieng are popular tourist destinations in Laos. In fact, traveling between these cities is now a very well-trodden backpacker path. Luang Namtha is opening up as an eco-tourism destination. Many travelers we met were on their way to Savannakhet and the 4,000 islands area. We, on the other hand decided to head North, or rather North-East on an extended history lesson.

I had planned to visit UXO (unexploded ordinance) exhibits in Luang Prabang or Vientiane but because we were sick that didn’t quite work out. Looking at the map, I could see that Phonsavan, where MAG has an information center and shows movies on their work in Laos was half-way to Vieng Xai on the Vietnam border. Vieng Xai was where the Pathet Lao hid out during the eight+ years of the Secret War. This seemed as good a route to Hanoi as any – even if our guidebook warned that particular border crossing was remote and sometimes difficult to navigate (the actual border crossing wasn’t).

The bus from Vientiane to Phonsavan was definitely pigs and chickens class. We’d chosen the night bus so that we could sleep en route. Hah! Not only were all the regular seats filled, there were also folding chairs in the aisle. Every time the bus stopped the poor people sitting on the folding chairs had to stand up, collapse their chair and stand aside to allow other passengers to pass. During this ten-hour bus journey, the only sleep we got was in short naps, fitful dozing at best. 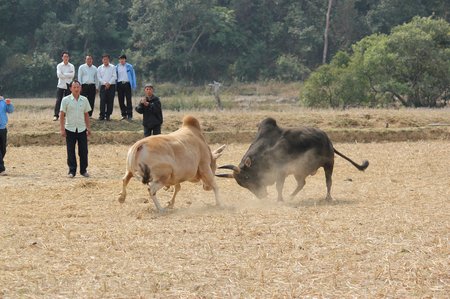 Phonsavan is a bleak, dreary town but that’s OK, every town and village in a country can’t be a picturesque tourist destination. Compared to Luang Prabang, Vang Vieng or Vientiane there were very few other tourists in Phonsavan, even at the town’s main attraction the Plain of Jars. In the two days we spent here, the unpolished local tourism industry was a refreshing, fun and funny change of pace. On our day tour to the Plain of Jars, we had one planned stop, at a Hmong village and three “Oh, look, that looks interesting” stops where the driver literally pulled in at the side of the road. We were uninvited guests at two local women’s homes to see rice noodles being made and local weaving traditions. Thankfully neither woman seemed to mind. The stop we made when the driver spotted a water buffalo “bull fight” was the strangest of all, particularly because there were no women in the 100-or-so spectators. Nope, just tall, white, western-tourist me. I think I got more stares than the bulls – even when they were fighting. 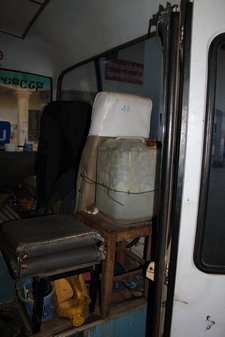 Our bus from Phonsavan to Xam Neua was a dilapidated minibus with windows that didn’t close all the way but, given that it wasn’t overloaded and the driver wasn’t tackling the roads as if on a car rally, it was actually a pretty comfortable ride – even if the interior gas tank, tied up with twine was a bit disconcerting. The temperature dropped precipitously as we climbed into the mountains, into and above the fog. It was damn cold. Perhaps Xam Neua is pretty in the summer but for us it was cold, wet and dismal. We compared notes with the (very few) other travelers we met and the overall consensus was that one needed to be wearing at least three layers of clothing to stay warm. Brrr.

From Xam Neua we took a day trip to the Pathet Lao caves in Vieng Xai. Visiting this hideout was like visiting a Cold War time capsule. The excellent audio guide and the exhibition displays were loaded with the party line. Every leader was kind and generous and thought only of the will and good of the people. Every person was a committed party member. Criticisms of the content aside, it was a fascinating tour and an incredible story. The caves complex covers many acres and even our children were riveted by the story of so many people living practically as hobbits for so many years.

I’d like to forget this memory entirely but I can’t so I’ll share it instead. At the market in xam Neua we saw rats laid out for sale right beside chickens and various bits of offal, and a bird of prey – which hadn’t been plucked. When Murph took an interest in the bird, the lady picked it up and held it out the wings. By now, we’re all sure that the “beef” we’ve eaten in places like Xam Neua isn’t really beef.

This trip into North-Eastern Laos was about as far off the beaten path as we’ve been so far on our trip – nights spent on trails and in treehouses excluded. Getting there, staying there and getting out were all challenging to the point that I found myself wondering if I’d passed over an invisible line between independent travel and stupidity. But, once we relaxed in the relative luxury of our hostel in Hanoi, I was very glad we’d made the effort. The movies at MAG pack a punch on their own but the fact that we could see bomb craters in the fields around and bomb shells on the side of the street made the story of the Secret War feel even more real. Visiting Vieng Xai to see where the “enemy” hid and hearing those people’s stories (in the audio tour) provided a tangible human perspective, one which caused BigB to wonder aloud: “But why, really, did the US even care what system of government the people of Laos wanted?”
Indeed, buddy, indeed.