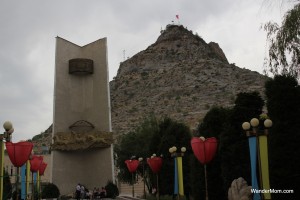 I should have read the itinerary provided by CBT Kyrgyzstan more carefully. How could I have thought that a guided tour of Osh would be a good idea after six hours in the car? All we needed was a lazy walk to stretch our legs. The kids nearly flipped when they heard that we were meeting a guide and that there were museums on the afternoon’s agenda.

We met P, our twenty-something Kyrgyz guide at Mt Suleiman – the town’s most notable attraction. Murph took up the role of attentive tour guest while I tried to distract CAM with BigB dragging in the heat bringing up the rear. With half an ear to the usual “Where are you from?” and “What are you studying?” conversation between Murph and P I overheard Murph sharing that we’d emigrated to the US from Ireland. P looked back at me and then to Murph. He was definitely surprised by our story but there was more, almost awe, in his expression. His initial demeanor, calm, a little nervous, capable and professional was swept away by enthusiasm as he explained that he wanted to go to America to study. He became less tour guide and more an eager, ambitious young man fired up with dreams of his future. We had won a golden ticket and he was excited just to meet us. He couldn’t get his questions about the hows and whys of our experience out quickly enough.

About half way up the hill we came to the first museum but it was closed due to a power outage. Our poor young tour guide was mortified. We brushed it off as no problem and BigB led the way to the top of the trail. Murph and I traded places as he took photos. P pointed out the Uzbek area of the city to me scarred by burnt-out buildings from the 2010 violence. Without someone showing me that district would have been indistinguishable from the rest of the city. This surprised me but I realized that I was surprised because I’d been expecting Belfast-style painted kerbstones, lampposts and murals. Bizarrely, with Northern Ireland as their familiar frame of reference my boys were interested in P’s explanation of Osh’s recent troubles. As BigB asked questions about differences between Uzbek and Kyrgyz I couldn’t help thinking that the “Both Muslims but…” in his description was so close to the “Both Christian but…” tangle that summarizes Ulster. In both cases unemployment and poverty are more important factors than the religious labels. 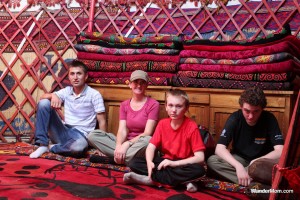 We made our way down the World’s Tallest Yurt and the second museum in a plaza at the foot of Mt. Suleiman. It was also closed – the cleaners had finished work early and gone home with the keys. Poor P didn’t know where to look. I explained that a walk to explore the city would be just as much fun for us. We decided to check out the bazaar.

Bazaar Schmazaar. There were a few touristy stalls selling traditional hats, coats and some knick-knacks at the entrance but apart from that it was the usual array of everything from plastic buckets to women’s underwear. It may be true that there’s been a bazaar here for over two thousand years but what you see today is strip-mall shopping Central Asia style. On the opposite side of the street the food bazaar was more colorful but my overall impression was that Osh is a fairly drab, workaday town. That said, away from the bazaar the broad tree-lined streets were quiet. It was a peaceful and relaxing change from China which both BigB and CAM commented on saying that already they much preferred Kyrgyzstan to China.

We walked through the town park, it’s unkempt gardens a little sad but the cool shade reason enough for locals to gravitate here. An old Aeroflot plane was parked, rusting, in the center of the park which ranks as one of the oddest pieces of public art I’ve ever seen. P seemed to be proud of it although he did go out of his way to tell us that the parks in Bishkek, the capital city, are much better. 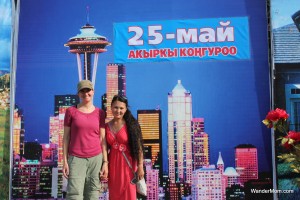 Eager to fulfill his role as a guide, P suggested that the town museum might be open so we headed back to the main square. We passed a large photo background where some people were taking photos. P explained that they were end-of-year graduation photos. I did a double-take: it was hard to miss the Space Needle in the picture. Of all the coincidences. We explained to P that the picture was of the city where we live. The young couple who had been getting their photo taken asked what going on and of course, photos had to be taken together

Back at the square we walked into a Kyrgyz wedding just getting their dancing shoes on. BigB and CAM weren’t interested by very glad the museum was still closed. With his camera instead of an invitation within minutes my social husband was in photos with the wedding guests, taking photos of the wedding guests and looking like he might settle into being Kyrgyz wedding guest par extraordinaire. I sat to talk to P.

“Does everyone come here to take wedding photos?”
“A lot do”, he waved his hand, “they come in from the villages to get married and stop here to take photos and dance.”
“Do the Uzbeks come here too?”
“Not since the fighting, they stay away.”

Murph had disentangled himself from his new best friends and we were waiting to be picked up by Anatolyi. I went back to talking to P as we people-watched locals on an evening walk and guests arriving when a second wedding party showed up.
“How come some women wear headscarves and some don’t?”, I asked, “most Kyrgyz are Muslims, right?”
It was a leading question. I knew that the population of Kyrgyzstan is a blend of Kyrgyz and Uzbeks as well as Russians and Chinese but I curious to hear what our young guide had to say.
“Most Kyrgyz are Muslim, I’m a Muslim, but not everyone…”, he struggled to find the right word for lapsed but his face showed how little he thought of such people.
“They’re not good Muslims.”
Satisfied with this description he continued, “Those girls don’t cover their hair”, shaking his head disapprovingly, “the Uzbeks are more devout”.
That surprised me.
“Do you think women should cover their hair?”, I asked with a smile since obviously I wasn’t wearing a scarf.
“Women who cover their hair are more clean”, now that was an intruiging description, “and the ones that cover all their body…”, he waved his hands, praising such devoutness. “I want to marry someone like that.”
I was tempted to ask if most Kyrgyz are lapsed and Uzbeks are more devout how he managed to do that without marrying into an Uzbek family but I thought that would be unfair so I let the conversation peter out.

Later, Murph and I shared the conversations we’d individually had with P.
“He wants to go to America”, Murph said, “but he doesn’t like America. He thinks Muslims are treated badly there based on how he sees Muslims portrayed in American movies.”
We agreed that to P, “America” is less a country and more an ideal, a Land of Opportunity. He’s young, reserved, educated, ambitious and eager to work. It’s a picture of a young Muslim man that to me stands in sharp contrast to news images of radical jihadists or demonstrating crowds that I wish I could share more widely.