We arrived in Xiahe on Mother’s Day. Given that we left Beijing at 6am, traveled by plane, bus and then another bus to get to this remote town on the edge of the Tibetan Plateau – and arrived before dark – I’d say this ranks as a pretty good Mother’s Day

Xiahe was the first real small town we visited in China – even the kids commented on the lack of people. Maybe it was the small population, maybe it was the cold or maybe it was the general goodwill created by the Labrang Monastery, but we also had more interactions with local people in Xiahe than anywhere else in China so far. I’d put Xiahe on our itinerary as a short-cut: I didn’t want to deal with the hassle and expense of getting to Lhasa but, I still wanted our boys to get a sense of the diversity of people and cultures in China and it felt wrong to leave out Tibet. I’d read that Xiahe is known as “Little Lhasa” and is an authentic Tibetan town at the southern end of the Hexi Corridor – the traditional route from Tibet into mainland China. It didn’t disappoint.

Xiahe was bitingly cold. The wind coming off the high grasslands wrapped a freezing breath around every bit of exposed flesh. The babies on the street had cheeks red raw from the wind. 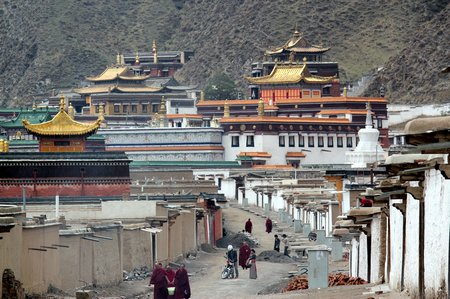 Copying the local women, I took to wearing a scarf wrapped many times around my neck but without their wool Tibetan-style coats, long to the feet with double-long arms, I was still cold which led all of us to stare open-mouthed at the many monks walking around in simple robes. Not satisfied that this was because of inner peace and warmth Murph went and looked up the “monk dress code” rules. Apparently monks can wear extra layers (including shoes and socks) outside the monastery, but once on the holy grounds, they must only wear their monk-ly robes. You heard it here first.

The monastery itself is a sprawling complex of many temples, halls of learning and living spaces. That last was another point of fascination for us: Labrang is so well-subscribed with novices and monks that there’s a building spree in monkly abodes going on around the monastery and (if our sources are correct) price inflation for said houses. Who would have thought it? A housing boom at a Tibetan monastery?

We took (two-hour) monastery tour. It was CAM’s 15th birthday. He may hold that against me forever – particularly the nauseating smell of incense and yak butter candles in every temple. But, then again, after the tour Murph and I went in search of a birthday cake and candles. I’d forgotten to bring our phrasebook on this shopping trip so we tried miming blowing out candles but that didn’t work very well. Thankfully it turns out that “Happy Birthday” (the song) seems to be one of those universally-recognized tunes. I managed to get the cake (well, pastry with a chocolate smiley-face on it), a paper birthday crown and the candles back into our room and from the room to the restaurant without either of the boys noticing anything. We had a little presentation after dinner. The very friendly owners/wait staff at the Everest Restaurant joined in when we sang “Happy Birthday” which was, I think, pretty cool. You never know, maybe when he’s older CAM will agree