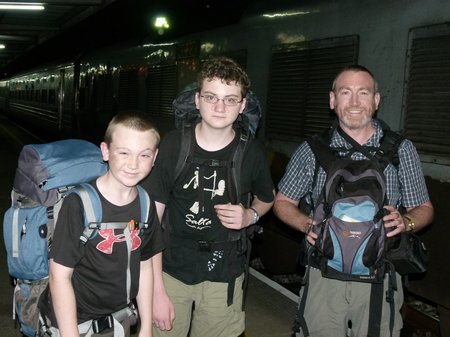 The overnight train from Kuala Lumpur to Penang arrives at the Butterworth station between 5am and 6am. The train station is tiny with just two platforms and a small office.

We were hoping to leave our backpacks in the left luggage and spend the day exploring the historical center of Penang (Georgetown) but there were no signs for Left Luggage anywhere. I was eager to get moving even if we had to bring our bags with us. “Why do you always have to be in such a rush to go somewhere?” my sleep-deprived husband snapped storming off to survey the outside of the station. It was going to be a tricky day.

Returning, he commented that the ferry to Georgetown was just a short walk away and we quickly established that although there was no formal left luggage office, for a very small fee the station master was happy to lock up our bags for the day. We ran to catch the departing ferry, making it just as foot passengers were being boarded. 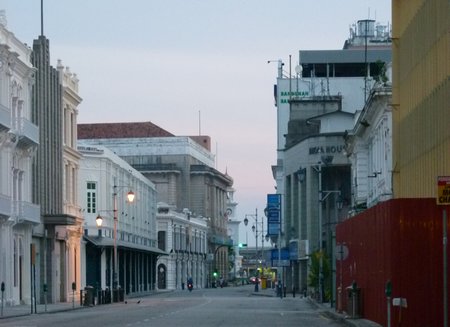 When I think of our day in Penang it unfolds as a classic unplanned day for traveling backpackers. Arriving into the tourist center of town at 7am on the weekend meant that the bus station and the streets were empty, the dawn sky slowly and then every more steadily taking over from streetlights. We didn’t have a map or a guidebook and the tourist office at the ferry port was closed. Murph was in his element but my stress levels start climbing when I don’t have a map in hand. BigB was too busy laughing at his Dad’s jokes to have a care and CAM was H-U-N-G-R-Y. We headed down what looked like a main street. We passed a clutch of backpackers waiting for the ferry to Langkwai and then a cricket ground where even at this early hour a game was already in progress. The cricket ground and the area around it clearly identifying Penang’s colonial past, something which was immediately obvious to Murph and I but which I’m sure our children wouldn’t have noticed if we hadn’t pointed it out to them. 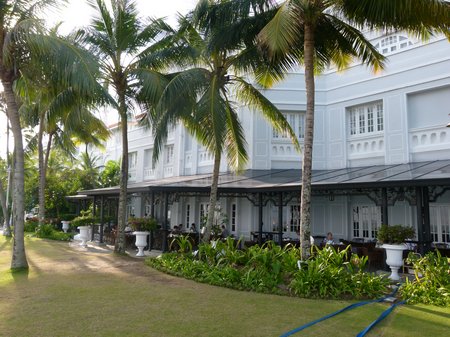 Following our noses around a bend in the road where the town seemed to be petering out, we came on the Eastern & Oriental Hotel. My need for my ritual morning cup of joe was becoming quite urgent by this point and even if the prices were exorbitant I guessed that I could get my caffeine hit here and that would give me more energy to pound pavement looking for reasonably-priced food for the boys. Standing at the entrance to the cafe asking about prices, not only were the smells of fresh baked goods, bacon and coffee making our mouths water but the breakfast buffet which we could see over the shoulder of the receptionist seemed to go on forever. The bright, airy dining room was practically empty and there was Japanese breakfast, Indonesian breakfast, American breakfast, a well-stocked fruit bar and a chef making omelettes to order. At $20 each it was pricey but seemed an appropriate and worthy investment. Over a leisurely hour or more we munched our way through first breakfast, second breakfast and even third breakfast in a way that would have made any Hobbit proud. 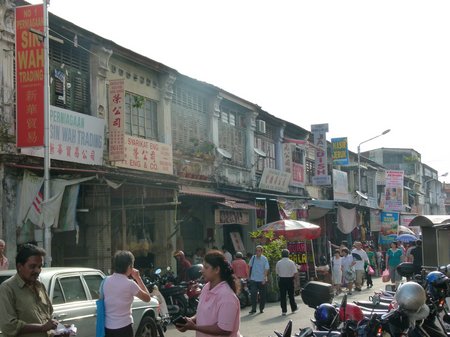 I picked up a tourist map of Georgetown at the Eastern & Oriental. With full tummies, a little rest, caffeine and a map (whew!), we were in much better shape leaving the hotel than we’d been on arrival.

Georgetown is small enough to walk around in a day. We explored a now-abandoned Anglican cemetary which BigB said was the “most likely place to find vampires that we’ve ever visited”. Passing the local markets as the town was waking up, we saw food cart owners stocking up for their daily feats of culinary wizardry (to me anyway, who can barely pull together a meal in a real kitchen) and a tuk-tuk driver cutting up an immense block of ice and loading the resulting pieces onto the bed of his machine. Bizarrely, I think I first read about blocks of ice in Little House On The Prarie but I’d never actually seen one (don’t ask me why storing and cutting blocks of ice never came up in Irish writing, my only guess is that it’s so damn cold in Ireland anyway that ice-houses were never needed). The cultural dissonance between the picture of turn-of-the-century American midwest in my mind and the little Chinese man cutting away in front of me almost caused me to miss the fact that my husband was practically asleep on his feet. We found a cafe with wifi and booked our hostel in Bangkok for the following night.